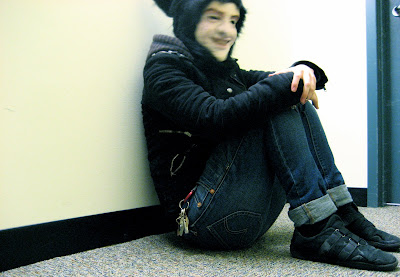 Starting around the age of four or five and continuing until around twelve, my most prominent recurring nightmare involved a tall, tall man in a black llama suit. 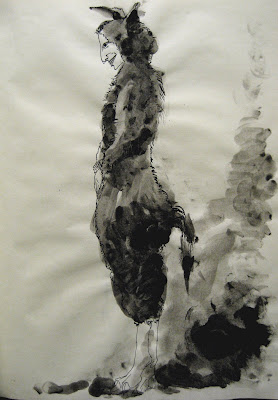 He had a human face and hands, but wore a full body suit and had hooves instead of feet. He was always grinning, usually hunched over, and took pleasure in hiding children on hooks in the basement of a lifesize dollhouse. His human features were long, drawn, and really creepy. 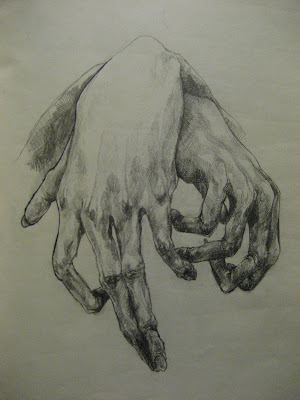 The most common narrative of my Llama Man dream began with me pulling up in a minivan to a large, abandoned field in the middle of the forest. Across the field we can see our new home. The car holds myself and an unknown family. 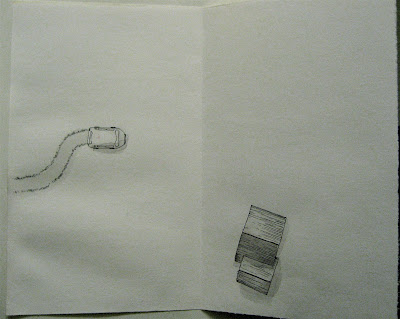 We can see the house from across the clearing. There is a large cutaway where the living room is, and there is also a figure lurking around the treeline. 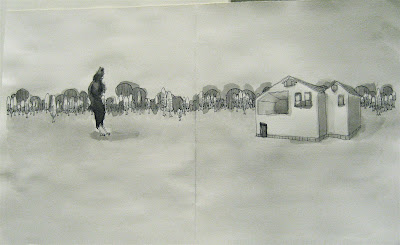 These are all sketches from my nightmare notebook, which I started over a year ago specifically for the purpose of reviving Llama Man under my own terms, through my artwork. Since then I have created myriad drawings and quite a few sculptural objects featuring or about him. I also made a life size costume for myself, mask, gloves, suit, stilts and all. Here are some more pages from my book, and a bit of the costume. 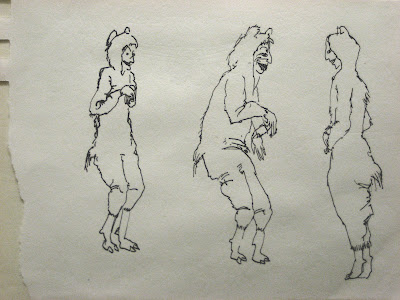 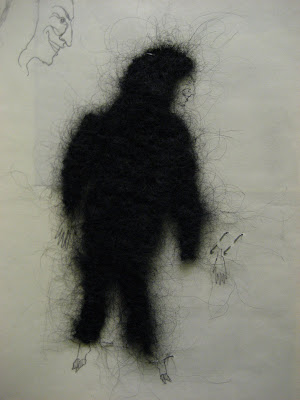 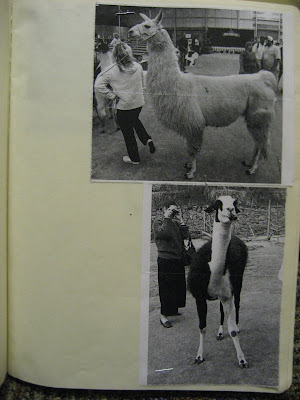 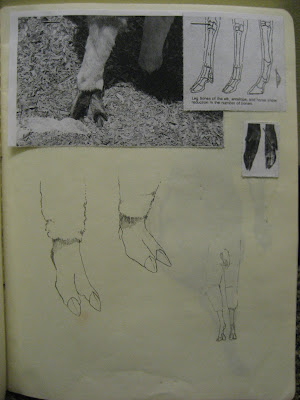 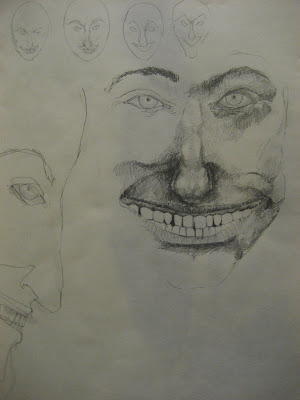 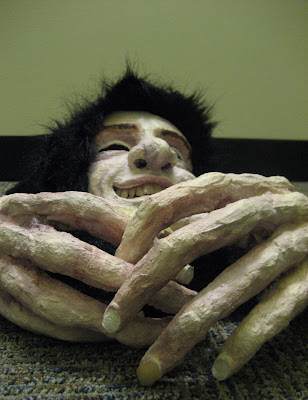 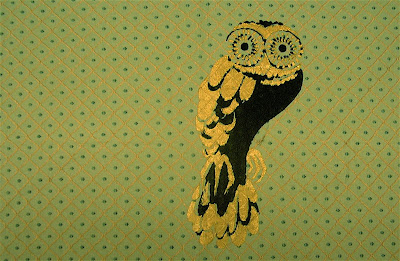 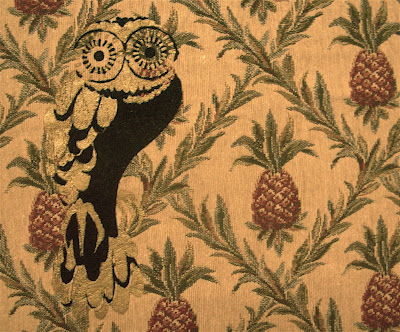 So my summer session is almost over. One class on mental illness, and one class on comics, in the fibers department. I've been doing a lot of screenprinting in the past few weeks. We started with cutting stencils, and then progressed to burning screens. Here's my stencil print, two-color, and a rough sketch of the process. 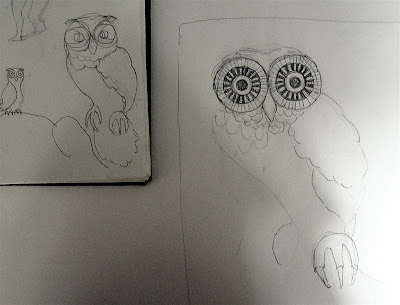 I started with sketching the image I wanted to create; obviously, an owl. I looked at a few photos from Google and worked this out. I was mostly concerned with the overall form and lines of the image. I was also thinking about Toulouse Loutrec's Chat Noir. 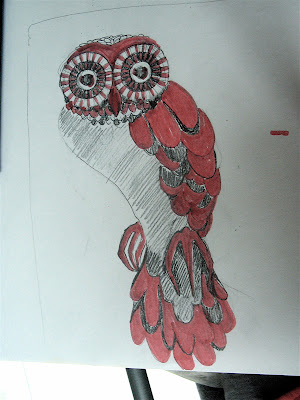 After I had my owl pretty solidly sketched, I filled in with red marker what I knew I wanted the alternate color to be. This is where it was really tricky. Because I was making a two-part stencil, and not just an image in emulsion, how most things are screenprinted, I had to be sure that all islands of color were independent, non-enclosed (at least by their own color) and had enough sturdy connections that my acetate wouldn't completely go to shit. 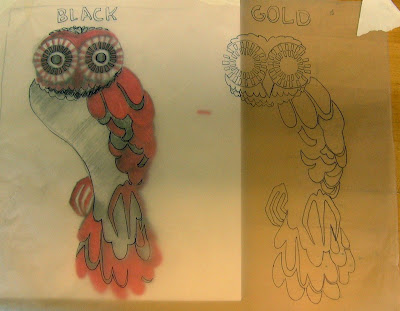 I took tracing paper and taped it over my drawing, using a pen to delineate the boundaries of my positive space (aka what I was going to cut out of the stencil for each color). I decided I wanted a black and gold owl. 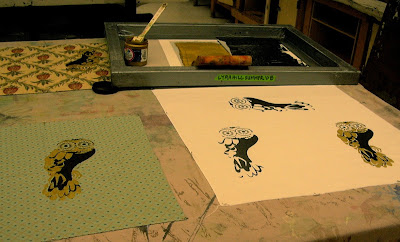 After I cut my acetate along the lines I had drawn from the tracing paper - I had to throw the tracing paper out afterwards because the exacto cut it up, but that was my intention - I taped it to the front of my screen and started pulling prints. You can see what the black stencil looked like: 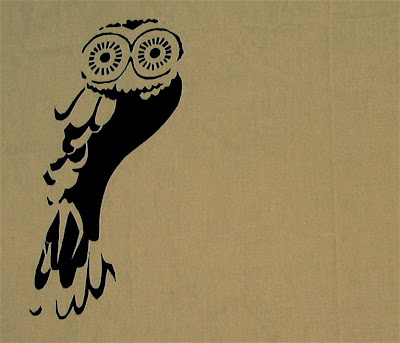 And then the gold stencil on top of it: 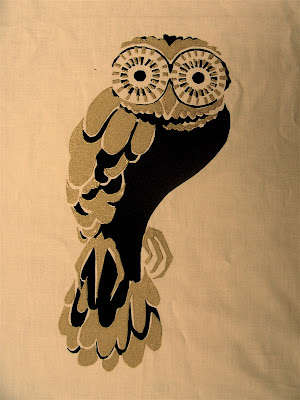 As you can see at the beginning of this post, I also printed my owl on a couple of tapestry samples I have. I really like both of them for different reasons; the teal one is beautiful and I love how he camouflages into the pineapple fabric. Printing on tapestry proved to be difficult, though, since the dimension of the fabric allowed ink to seep onto the outside of the screen, bleeding my print at the edges, a tragedy for a perfectionist such as myself.


On a completely unrelated note, Mandy adopted two kittens and we pretty much joint raised them. I am alarmed at the influence they have on my happiness and peace of mind. They go back and forth from my house and Mandy's mother's house (joint custody). Whenever they're here I can't stop cuddling them, and whenever they're gone I can't stop missing them. They're brother and sister: The grey one is Sebastian, and his sister is Charlie, the black one. 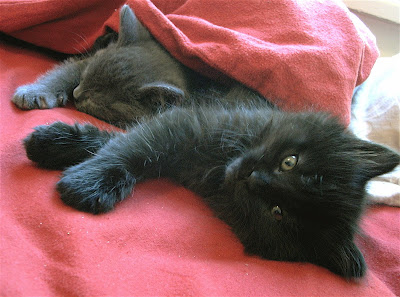 Email ThisBlogThis!Share to TwitterShare to FacebookShare to Pinterest
Labels: fibers, how to, kittens, owls, screenprinting

Courtesy of my girlfriend Mandy, around about Easter time: 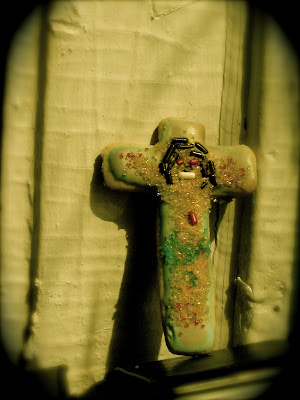