I recently gave a talk in a classroom where I focused on my interest in liminality, or liminal space. Briefly, liminal space is the time between states of being, between one solid idea and the next. Any ritual experience transpires in liminality. Any transformative experience requires liminal space. I bring up this point because it is a common thread throughout all of the work I do: creating narratives, writing speeches, teaching, entertaining, overwhelming with light and sound: activities which induce or require liminality in order to be successful.

About ten days ago I orchestrated the largest showcase of my work to date at Conversations at the Edge, a weekly screening and lecture series curated by the School of the Art Institute of Chicago (where I studied) and hosted by the Gene Siskel Film Center (where I work). It went very, very well. It sold out. People had a really, really good time, from reports.

The three videos above were conceived as interstitials, intended to knit together the three disparate performance pieces that made up the bulk of the show. They were written and performed explicitly for that experience - although now I am quite pleased to have some short digital work I can toss about indiscriminately, in contrast to the arduous, precious distribution and projection of analog films which is my typical burden. 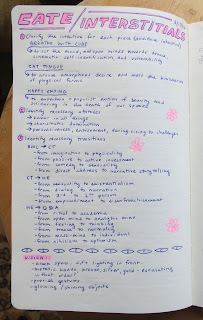 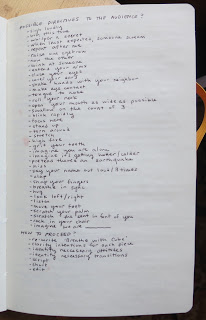 You can see in my notes the development of these liminal videos. I began with a sense of what I wanted to accomplish, and an assessment of the tools at my disposal. (Skills in leading trance, an intern with access to DSLRs, metallic makeup bought on a whim from Kryolan, etc.) I listed the intents of my three performances, and hypothesized the best directions for transitioning from one to the next. I listed out all of the activities I could imagine an audience acquiescing to at the behest of a pre-recorded video.

I wrote three scripts, spoke them out loud to make sure they lasted about three minutes, then traveled to the Magic Hedge (my Chicago place of power) and recorded myself speaking, in three different environments. remember was recorded on a pier; this was recorded within shrubbery; feeling was recorded in a dirt footpath stone tunnel. 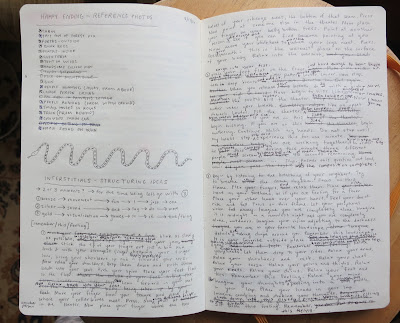 I edited the recordings and then performed along to them while my utterly fantastic intern Hannah Kim recorded my hand motions in front of a black velvet backdrop. Pro tip: applying an opaque layer of makeup to hands and forearms takes a considerable amount of time. 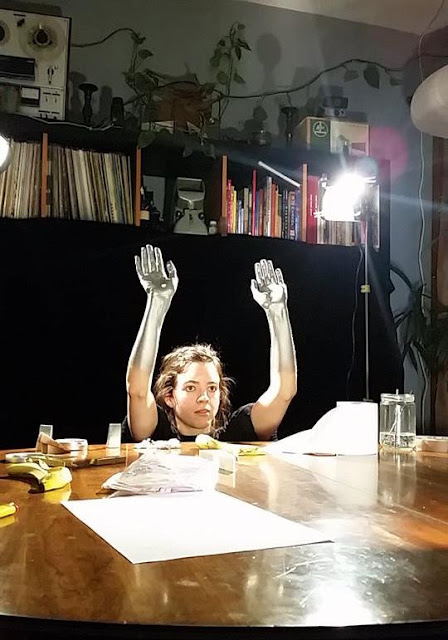 So how did it go? These videos were well received, and helped facilitate seamless transitions between performances during the show, providing uninterrupted liminality. They gave me time to take a breath, collect my thoughts, and change costumes between pieces. My audience responded eagerly to every instruction. I could hear people giggling when they were instructed to grab their crotches. You can listen to the live recording of this by playing the track below. I love it.