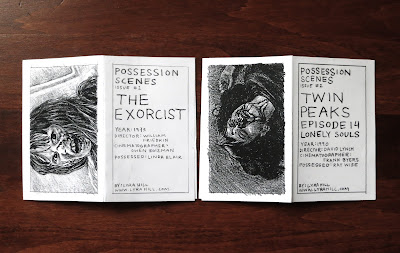 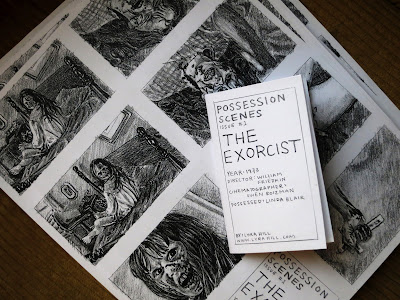 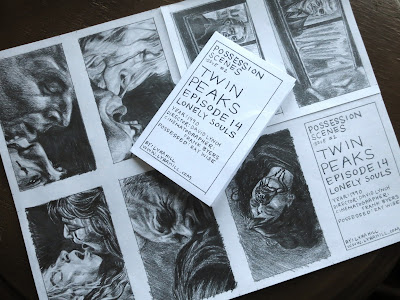 Say hello to the first two issues of Possession Scenes, my new series of mini-comics drawn from films and television programs featuring the titular subject. Each issue is folded from a single page, and contains an informative title plate [issue #, source, year, director, cinematographer, actor possessed] followed by seven pencil renderings of sequential stills from the scene. 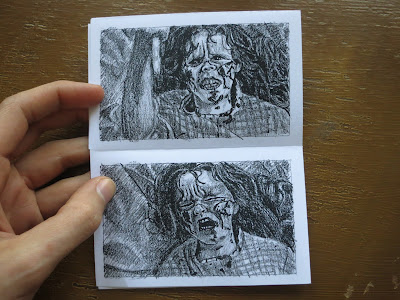 I chose to start with The Exorcist, because duh. Issue #2 covers the moment in Twin Peaks when Laura Palmer's murderer is revealed - during a subsequent killing. 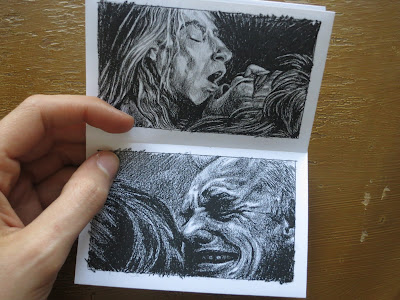 Issue #3, in the works, features "the abortion scene" from Andrzej Zulawski's 1981 film Possession. I was tempted to make Possession the subject of Issue #1, but that would be too confusing.

The impetus for Possession Scenes was part desire to have something new for CAKE, part research for an upcoming film project involving possession (more details soon), and mostly curiosity about the visual strategies, trends and variations employed to show a character losing themselves to something supernatural. Possession is something in which I am personally and spiritually interested. Scenes of possession always ride the line between silly and frightening, whether fictional or actual. 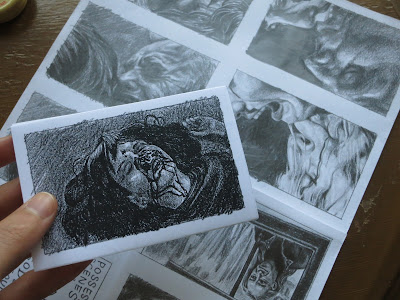 Last night I watched The Mask, in preparation for Issue #4, and while I had to skip past much of the film to avoid the insufferable, hideous antics of Jim Carrey's creation, observing the cheesy CGI of the initial transformation and the way the mask glimmers and hypnotizes Stanley Ipkiss was a delight.

One of the most interesting challenges in this project is translating a scene into seven silent stills. That's not a lot to work with. The pacing is delicate: three pairs of images, then one final punch. I need to make the action and intention of the scene clear without using any text.

You can pick up issues #1 and #2 from me this weekend at CAKE. I'll be at table 6 with Lale Westvind, a few paces through the entryway, to your right.

Here's a nice article in Chicago Magazine about emergine cartoonists, featuring yours truly ("who is, by many counts, a major player in her scene's revitalization") written by Jason Foumberg.

Remember how I starred in a movie? It premiers next month on Saturday, July 13th at the Gene Siskel Film Center, with two more shows later in the week.
Posted by Lyra at 13:47 0 comments