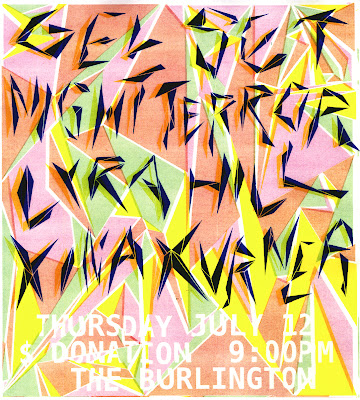 Hey, listen. I'm going to be reading Go Down again, at the Burlington, on the 12th of July (a Thursday). The show starts at 9:00pm sharp, and there's a suggested donation of $7. It's gonna be real good and if you're in Chicago you should go. Seriously, this is a great line up. It's a new environment for me; aside from the CAKE benefit at Mortville, I've never been the one performance artist in an otherwise musical revue. Hopefully people will dig it. I think they will.

Xina Xurner make "noise diva drag dance-anthems that ooze sex, death, and decay," Night Terror makes delicious, creepy electronic dance-prog that you can't dance to because it's melting your bones and in a really upsetting time signature, and Gel Set makes "dark electro-pop" with a seductive voice and a morbid sense of humor. Sign up on Facebook here.

I challenged myself to design this poster in under an hour, and succeeded. The actual Photoshopping and printing took several hours more, but on the whole, this flier was a remarkably simple effort for an impressive payoff. Each color is a different color separation layer. In the original file, they all line up perfectly. I wanted them to misregister, however, for perhaps obvious reasons: the computer text at the bottom fragments, and the overlapping facets combine to form really nice new tones.
Posted by Lyra at 11:00 0 comments

Drunk art: I say, "Hey, let's go in the photo booth!" and then I say, "we have to plan it first" because I like making everything difficult for everyone. This is a page of my sketchbook with the organizational sketch and the resultant composition; I'm in the middle, with Melissa on the left and AJ on the right. We got everything right except for Melissa forgetting to take off her sunglasses in the last frame. Yes, this post is worthy of my blog; it's my blog and I say so.
Posted by Lyra at 09:30 2 comments 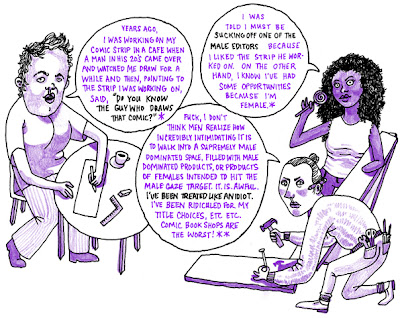 I recently finished a collaborative comic with Anne Elizabeth Moore for her Ladydrawers series on Truthout. You can go read the full comic, as well as the reactionary comments, here.

Ladydrawers is a series of strips, each drawn by a different female artist, about female artists in the comics industry. Anne Moore and her team collect statistics from a variety of women and transpeople in the biz. My comic focuses on gender and sexuality-based harassment, and features personal stories collected by the ladydrawers and Janelle Asselin. 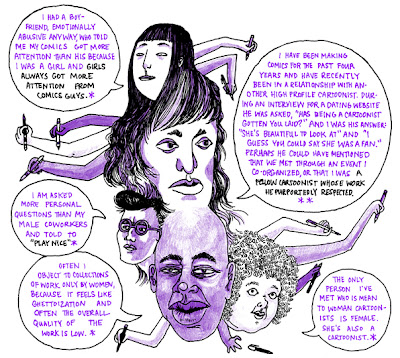 I drew this strip while I was vacationing with Tyson in Utah. The comic has nothing to do with Utah. I made a cake in Utah and we ate it all weekend, and went on some hikes and to a drive-in movie. 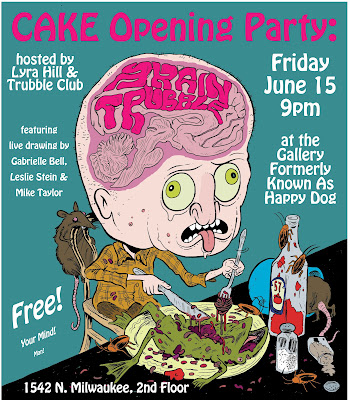 This upcoming weekend, the 16th and 17th of June, is the first annual Chicago Alternative Comics Expo (CAKE). I'll be tabling with Lale Westvind, Ian McDuffie, and Ben Bertin, right next to the Trubble Club table... wait, did I just mention Trubble Club?! It just so happens that Brain Frame and Trubble Club are joining forces to hold the opening night party for CAKE, a special edition Brain Frame featuring all Trubble Club comics, all Trubble Club members, all the time! How serendipitous! You'd think that we're all friends who live in the same city or something, and respect each others' considerable and multi-varied talents. Or something.

I'm the official host of this event, along with Sackley, the lovable dog with unfortunate testes, appearing in puppet form with great effort from Bernie MacGovern and Jeremy Tinder (it takes two men to drag that sack). Gabrielle Bell, Leslie Stein, and Mike Taylor will also be coming on stage to do live drawings during the event. Jeremy Tinder, Aaron Renier, and Grant Reynolds drew the poster. Attend: Friday, June 15th, 9:00pm, at 1542 N Milwaukee, 2nd floor. Free, donations suggested.

1) Brain Frame got reviewed on Make Space! Thanks Kelly Parsell!

2) I have a small gallery wall goin' on at the Gene Siskel Film Center, in association with the Chicago Underground Film Festival (CUFF). My CUFF poster and the original drawings are on display, as well as some other family-friendly screen prints and the front and back cover of Compiled. The Film Center is open starting at 2pm on weekends, and 5pm on weekdays. I look pretty happy, right?