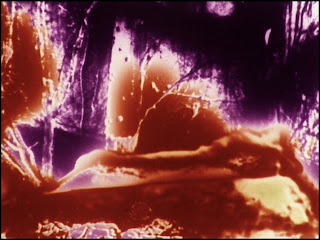 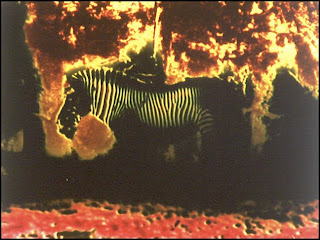 Remember this? The footage I shot at the zoo, which I then created several HiCon mattes of, isolating the blacks, whites, and greys? Well, after my experiments recreating the image from the original negative as well as different textural stand-ins, I decided to move on to recreating it with different colors filling in for each gradation. The images you see above are two of the very few successful frames resulting from this attempt. Again using the Oxberry OP, I photographed each gradation separation matte in conjunction with a mock orange mask and various color filters, transitioning between colors with cross-dissolves, three times onto 3383 color print stock. Had I not overexposed everything, (or, really, underexposed by overlighting) I would have ended up with an awesome version of the same footage where each restricted gradient of zoo footage gently oscillated between random colors in beautiful psychedelic tandem.

Before I attempted the above experiment, however, I did fuck around with some other techniques, namely bipacking the original negative with the gradation separation mattes and a fake orange mask and cross-dissolving color filters. Probably because of the extra film strip (the negative), this attempt was (kind of) properly exposed and turned out some beautiful results.

This video begins with a straight up positive print of the footage, which I included to see how my orange mask was working out. I underestimated the amount of orange I needed, which is why everything looks sepia-toned. This becomes irrelevant as soon as the multiple exposure (due to cross-dissolving) kicks in - as soon as the ducks come out you can see me switching around the color filters. I had not yet added the gradation separation mattes, and at this point it's still a straightforward, though colorful, positive print.

Of course, none of it looks straightforward at all, because the film is out of focus and the frames are jumping all over the place. This is because I made the amateur mistake of forgetting to close the gate in the camera, so the print stock was sliding all over the place. I remember being confused because the frame count kept getting out of whack on the camera and the projector, and now I know why, and what to do if it happens again. In these still frames you can see how I intended the cross-dissolve colors to combine, and how they look when they're separated by misregistration: 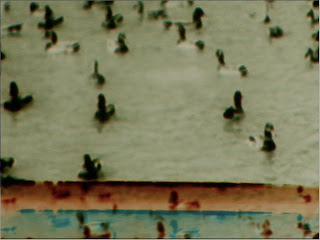 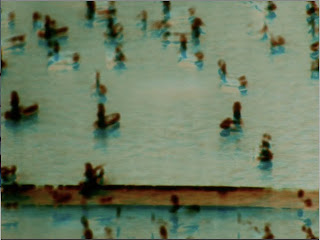 I also love it when all of a sudden there's a frame that found its place in the gate, and managed to be in focus: 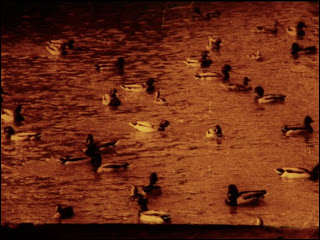 Ultimately, in this instance I'm happy I forgot to close the gate, because it gets really cool when the zebra comes in. At this point in shooting the print I locked into one frame of the negative, and began combining it with its black/grey/white mattes. I exposed each separating matte with the still frame and plenty of cross-dissolving color filters, rewinding the film each time to shoot the next separation. In the end I had exposed the same strip of print stock about six times, accounting for each gradation and the cross-dissolves included in each of those runs. Of course, I didn't know my film was helter skelter inside the camera. Here are some nice stills of that crazy shit: 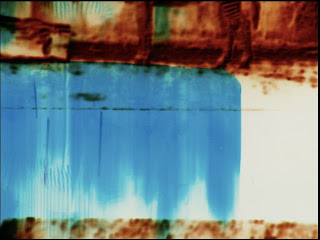 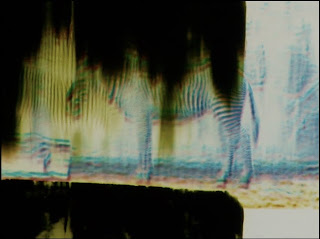 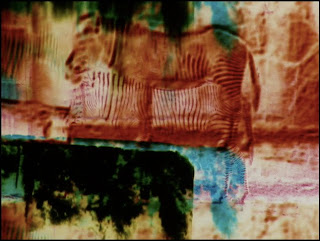 At the end of the video the zebra image fades out and you start to see just the shape of the misregistered frame. I was continuing with the filters and dissolves, but because I took out the negative and the mattes I ended up over(under) exposing everything and all there is the shape and a slight glow from the changing filters.

Technically this project pretty much resulted in disaster, but I still love some of these images and the things I learned from my mistakes are incredibly valuble. Next up: intentional psychedelia and sci-fi themes. I'm done with zoo footage.
Posted by Lyra at 11:00 0 comments