I hope everyone had a good Valentine's Day, Lupercalia, and President's Day! 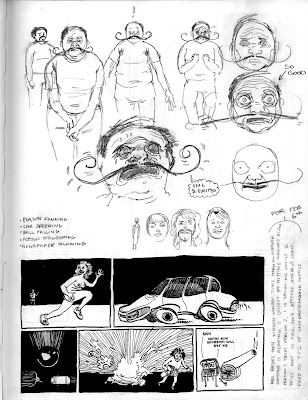 Here is a page from my new sketchbook, with a comic at the bottom from my new class. The assignment was to draw: a person running, a car speeding, a ball dropping, someone staggering, and a newspaper blowing. I turned it into something of a narrative, I suppose, with the pun at the end being that the newspaper is blowing the canon in hopes of creating destruction worthy of headlines.

The sketches at the top are for a character named Howard M. Burgers, from another mini-comic I'm working on.
Posted by Lyra at 20:42 1 comments 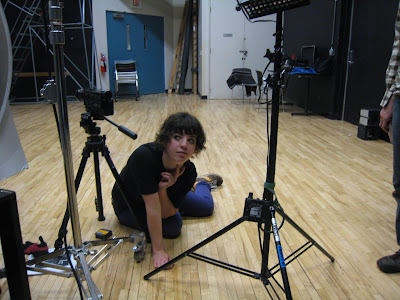 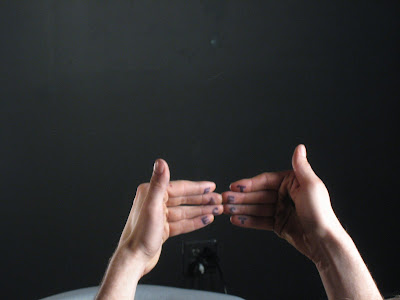 I spent much of Wednesday night in the shooting space at school, exposing my first 50-ft roll of Super 8 film. There was no real cohesive structure to what I shot, and definitely no narrative thread, but it was really fun and assuming nothing terrible happens, I've very excited to see the finished product. 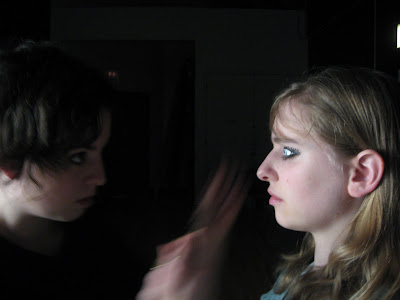 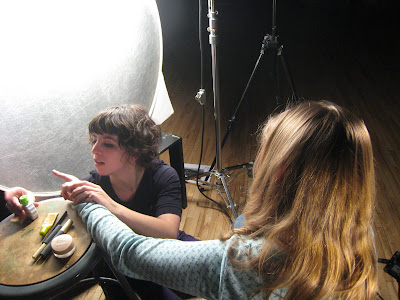 My friends Molly Gilbert and Nick Jackson helped by letting me impose upon different parts of them a variety of faces, eyes, mouths, and holographic glasses. I drew on them with white out, eyeliner (liquid and pencil), lipstick, and ballpoint pen while we passed a digital camera around to whoever's hands were free. 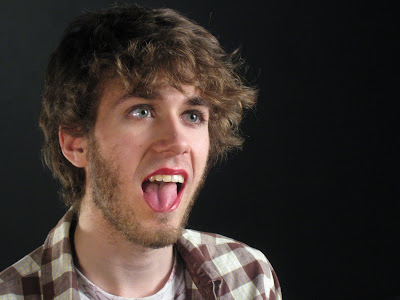 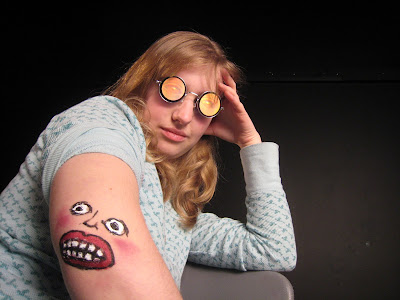 Most film runs at 24 frames per second, but Super 8 runs at 18fps. I shot at this speed, as well as 9fps (for sped-up playback) and 24fps (for slightly slow motion, as well as a richer image). I also did several seconds of stop motion shooting, taking one frame at a time to animate Molly's creepy fake eyes and Nick putting lipstick on with his tongue.

I'm crossing my fingers hoping I didn't under- or over-expose. If it comes back from the lab alright you can all look forward to seeing it up here soon. 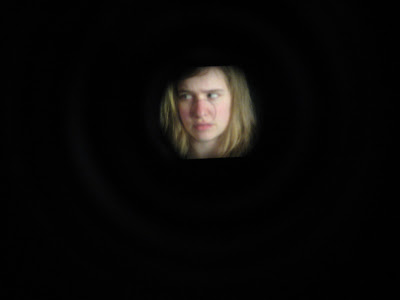 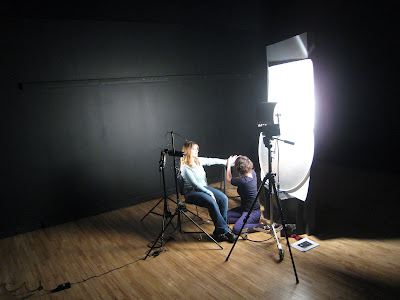 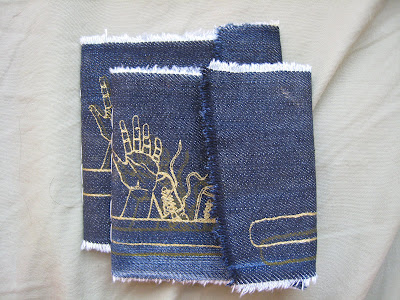 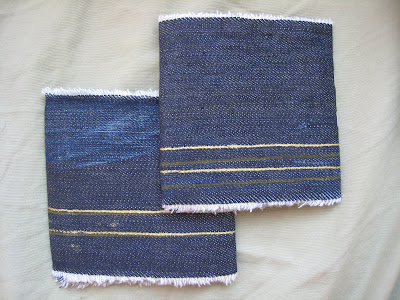 On Tuesday morning I had to show up to my Artist's Books class with an edition of 15 simple books. So I took the drawing I made last Friday in my comics class and turned it into a little 10-page pamphlet stitched volume. 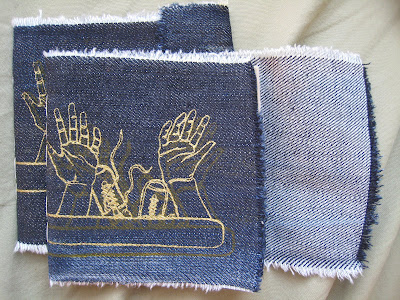 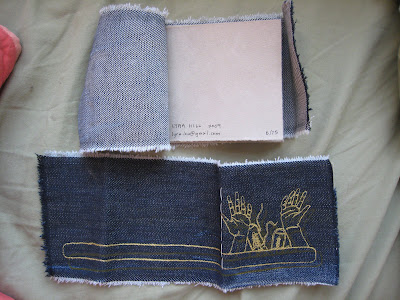 The covers are made of an old pair of jeans I found in the scrap bin. Everything you see printed has been silkscreened, because I love silkscreening. The paper is nice and soft, thin drawing paper, because I love paper. The flow of images through the book worked out really well, and I find it interesting to compare reading the comic to flipping through the pages. 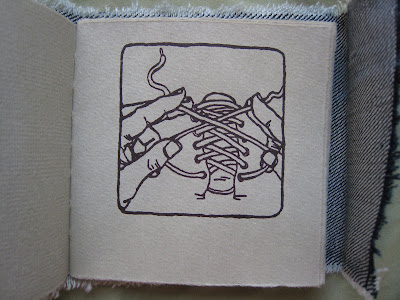 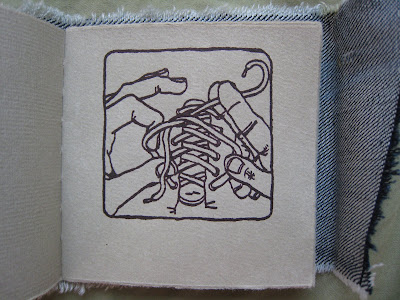 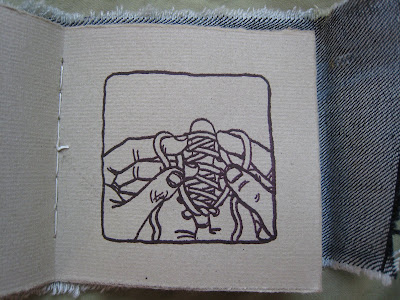 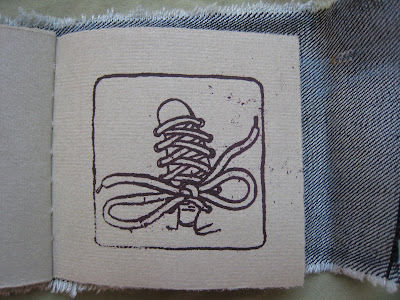 It's a simple book, but it's well made and very pleasing to handle. These are the only two I have left; the assignment was to pass a copy to each of your classmates and recieve one in return. So now I have even more tiny books. I'm going to have to buy some giant bin thing soon, a side effect of being into independant comics that I had not anticipated.
Posted by Lyra at 11:36 1 comments 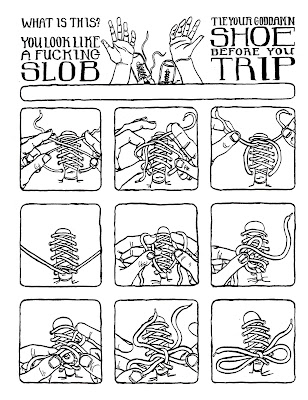 I'm in a comics class this semester, and so far we've only been assigned simple exercises in visual narrative (from a book I hate) like a ball breaking through a window or someone knocking over a lamp. The other day in class we had to draw 'how to tie a shoe' without using any verbal direction. I guess I'm better at drawing shoelaces now, but I find the assignments a little dull, so that's probably why my sketchbook is developing a profanity issue.
Posted by Lyra at 16:54 0 comments