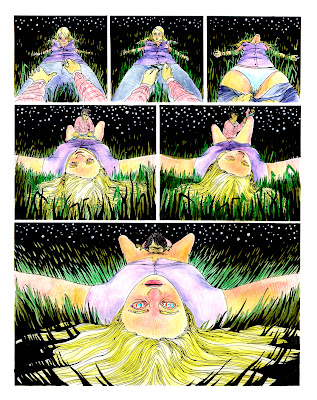 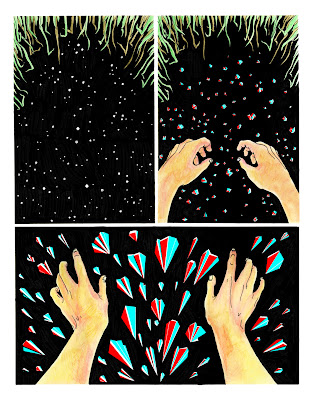 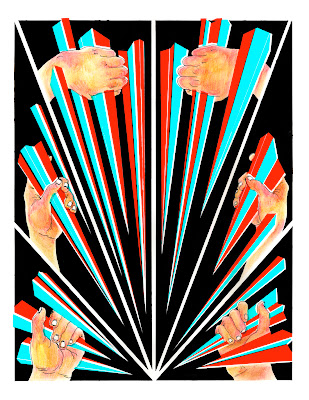 Wuh-oh! What's happening here!?! This is the second part of Go Down, the comic I made for the first issue of Chromazoid, a comic anthology and mixtape that still needs help, so help us! These are pages 4 through 6. The end of this comic gets even crazier.

I really like how the panels in the 6th page are shaped like the crystals.
Posted by Lyra at 13:30 0 comments 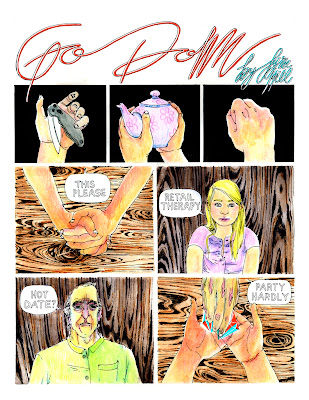 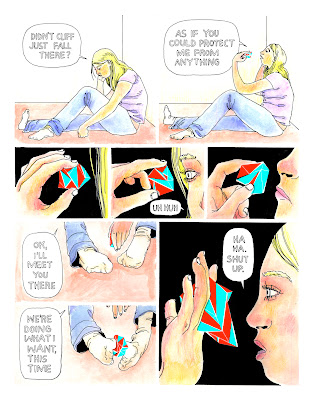 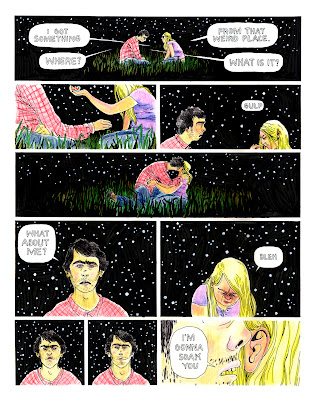 So, what do you think about this special sneak preview of my newest comic? Do you like it? Does it pique your interest? Personally, I think this is the best work I've done to date, and twice as exciting - because it's in color. It's my first comic in color! (Well, not including these two, but let's not talk about embarrassing, ancient history.)

What's that you say? You'd like to know what comes next? Well, then why don't you consider donating to the Kickstarter campaign for CHROMAZOID, a brand new, full color, horror comic anthology put together by my dear friend Lale Westvind? Contributing a mere $25 earns you a signed copy of the book as well as two mini-comics and a mix tape! Give more, and you get even more cool stuff! There are nine artists featured in CHROMAZOID, including yours truly and a gang of other criminally talented fresh meats.


Seriously, this is an incredible project and I would really love it to get off the ground. If our first issue is successful, this will become a truly great series of compilations, full of art by people who really, really deserve to have their work seen and distributed. Don't you want to be able to say, years down the line, that you helped the first ever issue of CHROMAZOID hit the stands? I guarantee it will get you laid at that future party.

About the comic: Because I had to work in color for this project, I wanted that trait to be important to the story, and a definitive part of the world I'd be drawing. I've been thinking about crystals a lot recently. (When I told Otto this, he said "Oh, good, you're getting back to your roots.") An image of a multifaceted, ever-changing crystal in anaglyphic red and cyan keeps appearing to me, and so it became the catalyst in this story. I colored the rest of the comic with ink wash pencils, leaving blank space for the crystal. I made overlays with tracing paper on each page, using a pen and ruler to outline the crystal and its facets. After scanning each page and its overlay, I filled the facets with flat computer color, artificially misregistering the red and cyan layers (and setting them to 'multipy,' so they would combine as if they were printed pigments) to create the illusion of offset printing and three-dimensionality (not to mention otherworldliness). I left the crystal's outlines blank to emphasize its unique properties and make it seem even more out of context with the rest of the comic.

A lot more happens in Go Down (it's eight pages total). Please consider donating! I'm very excited about this work and I want everyone to read it.
Posted by Lyra at 14:04 0 comments 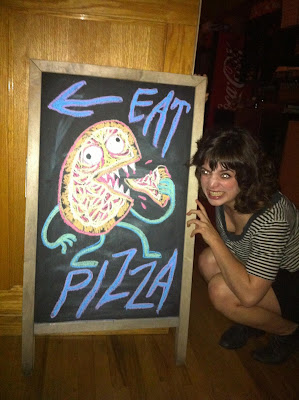 I work at a pizza place. Whenever I work anywhere, I get asked to draw the signs. That's me with the new chalkboard we got at work (no one else is allowed to draw on the chalkboard now, according to my boss).

Whenever it's slow my mind goes hyperactive and I have to occupy myself. I could get a lot of work done, in this time, except I'm not usually allowed to sit down. This uncomfortable limbo yields a lot of quick sketches on Guest Checks. 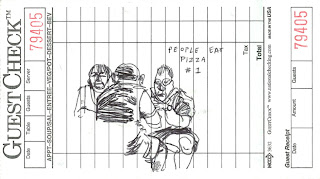 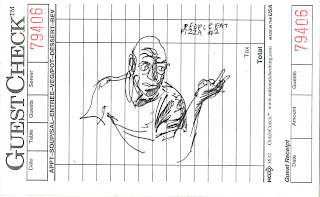 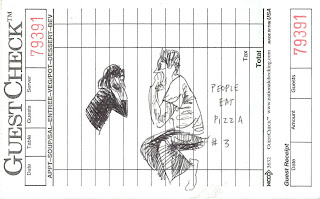 Halloween is also a very special time of year for me. I love making Halloween costumes. This year, if I get my idea together in time (I'm going to be a shaman priest slaughtering a goat) it'll be awesome. Halloween, or Samhein, is also... THE WITCHES' NEW YEAR!! which is really exciting.

This is what happens when I get into the spirit while I'm bored at work: 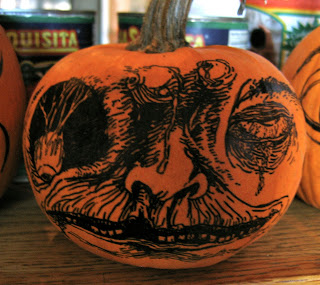 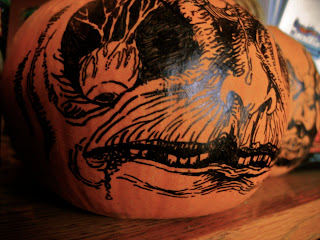 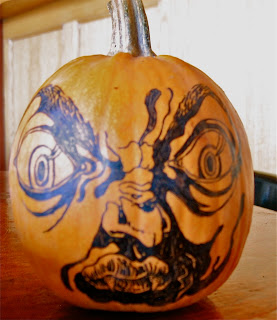 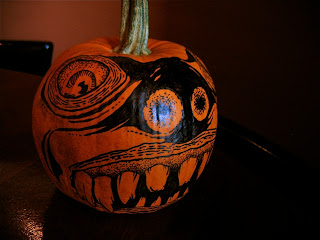 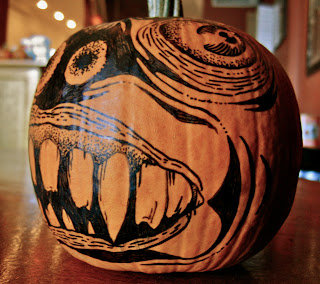 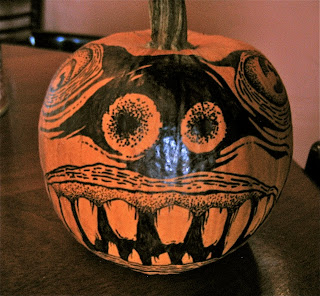 The pictures above are ordered in the sequence I drew the pumpkin. I think each consecutive one is better. I used a Sharpie (actually several).

And, of course, more chalk. These two drawings are on either side of the sandwich board right now. Spot this sign in Chicago; you'll find me inside! I won't give you free pizza. 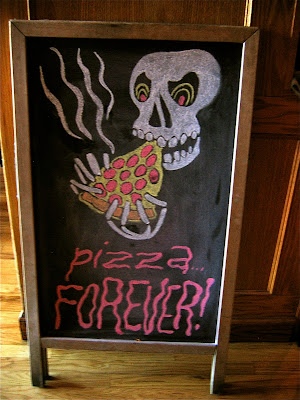 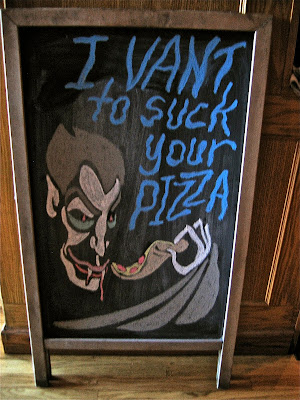