I starred in a movie. My friends Jerzy Rose and Halle Butler wrote this movie, Jerzy directed it, and more of my friends, like Mike Lopez and Ted Tremper and Buki Bodunrin, also starred in it. The majority of the shooting took place last March. This trailer was only just finished, and I believe the film is waiting to show at some festivals, so if you'd like to see it in a theater near you, I'm sorry but I can't give you any more information - not yet, at least.

As you can see from this trailer, my character cries a lot and gets injured repeatedly. It was a lot of fun to shoot this movie, but I'd also like to take this opportunity to say that crying constantly in a film means you're actually crying constantly for days on end while they shoot multiple takes and set up for different camera angles. For a real cry, it's important to stay miserable and in the 'crying zone' even while you're not on camera. And, the longer you stay in the 'crying zone,' the deeper the wells of angst you must tap. I recommend starring in a movie as a crying character to anyone who is having trouble getting in touch with their dark side. 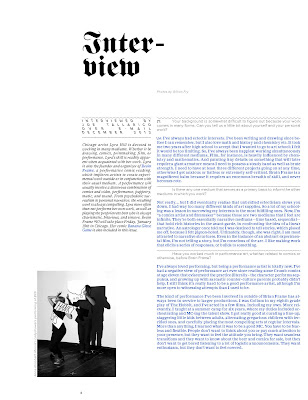 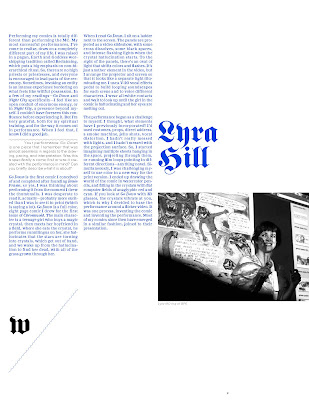 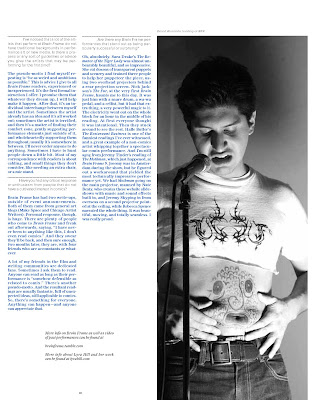 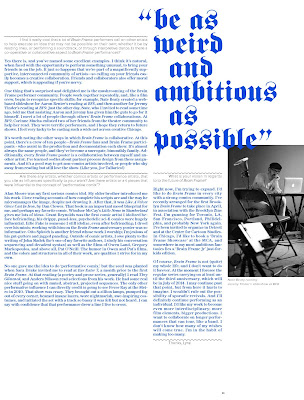 Last week, the 119th issue of Lumpen, the long-running counter-culture free quarterly, was released. It's Lumpen's first all-comics issue in over a decade, and a really stunning collection of work by almost 40 artists, most based in Chicago. The issue also includes an interview with me, by Joe Tallarico. You can click on the images above for a larger, legible version of this interview.

If you've got your calendar out, and you care to mark it with your special Lyra pencil, here are some dates of which to take note:

- On February 28th the 20th annual Chicago Underground Film Festival's movie poster gallery show opens, which will include last year's CUFF poster as well as the Two Years At Sea poster. Extra prints of both will be on sale at the show.

- March 8th-9th is the Chicago Zine Fest. I'll be tabling with Thomas Comerford and his incredible son Henry.

- On March 9th, Township is hosting one of several CUFF afterparties. In a delightful bit of synchronicity, being as it is the final day of the Zine Fest, I'll be performing my comic Banana Glove Game to open the show.

- On April 12th, I'll be hosting a special-edition Brain Frame/CAKE fundraiser at Peanut Gallery, featuring comix readings from four artists, including Brain Frame alumi Andy Burkholder and an epic set from the incredible Paul Nudd, as well as a live auction. I gotta start practicing my tongue-twisters.

- On April 13th, I'll be reading Night City at the Hideout as part of a special evening put together by Pocket Guide to Hell, an ingenious and informative series of Chicago-based historical reenactments and happenings.

- April 21st is the second annual Brooklyn Zine Fest. I'll be traveling to NYC with Tyson, who will be playing a few Night Terror shows, in Brooklyn, Pittsburgh, and Baltimore. I'm tabling at the fest and will be hosting the first ever Brooklyn Brain Frame, a celebration and afterparty for the Zine Fest as well as a seminal moment in Brain Frame history. I promise to reveal more about this rousing announcement soon.
Posted by Lyra at 11:03 0 comments 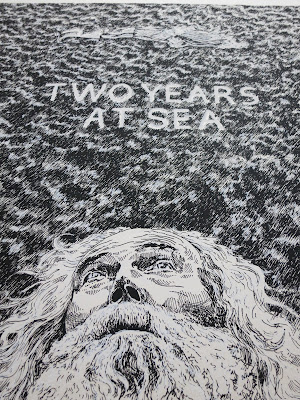 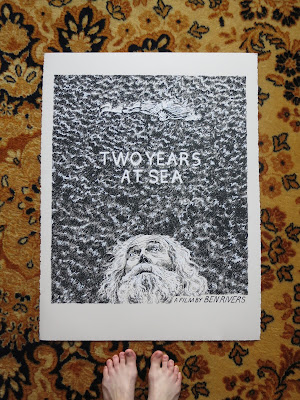 Back in September, the first feature-length film by Ben Rivers began its first official tour of the United States. The single existing 35mm print, blown up from hand-processed, black and white, anamorphic 16mm film stock, even traveled through my booth at the Siskel. Two Years At Sea is an 88 minute avant-portrait of a grizzled man who lives alone in Scotland's wilderness. Part documentary, part meditation, it received rave reviews from a number of respectable publications. 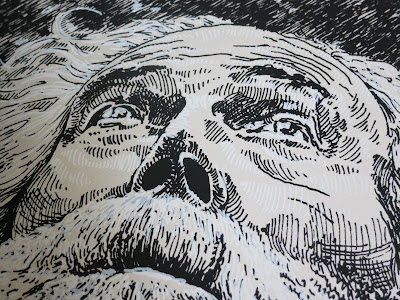 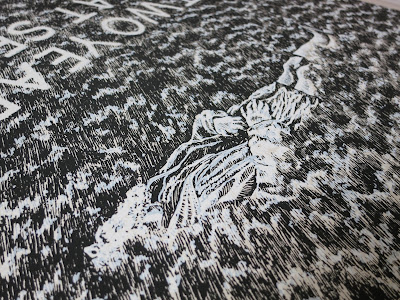 Ben Rivers is one of my favorite filmmakers, and someone I've assisted with graphics before. Regardless, it came as a great surprise and honor when he hired me to make the poster for the U.S. release of Two Years At Sea. After negotiating a deal, he sent me a link to watch the film. I captured over 40 stills and proceeded to sketch the most compelling ones. 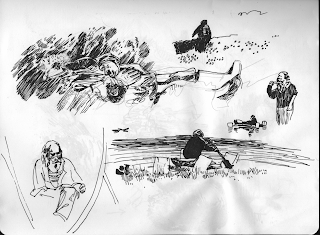 I drew some mock-ups of what pieces I thought might make an interesting poster, and we narrowed down the images through a series of email exchanges. I sketched our top choices again. 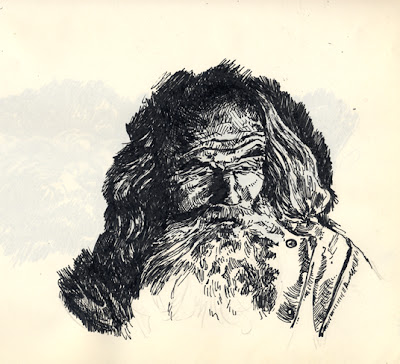 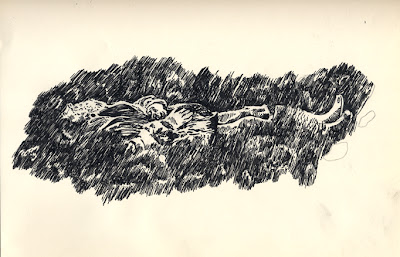 After some more back and forth, we agreed on the final layout of the poster, and the two screen print layers (white-silver and black, on grey paper). The poster would be 24 x 30 (the same size as the BF7 anniversary poster). I chose to draw it a bit smaller, on 14 x 17 paper, so that when the image was blown up my pen marks would be rougher and more obvious. 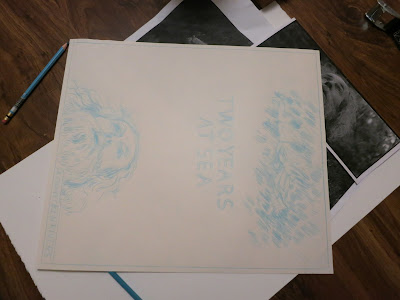 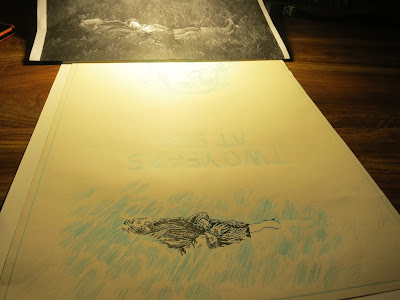 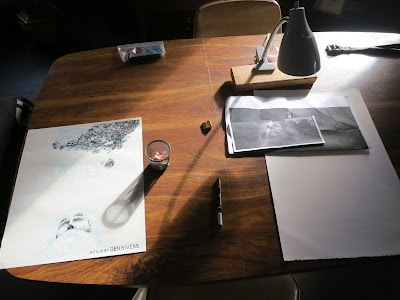 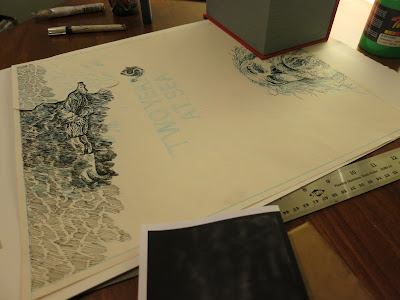 Okay, so the paper I drew it on wasn't exactly 14 x 17. More like 14 x 16, or something, which accounts for the finished print fitting on the paper more like the emulsion on a polaroid than an image in a proportional matte. And, using a smaller piece of paper lessened the amount of grass I had to draw, which ended up being awesome. Because drawing all of that grass sucked. 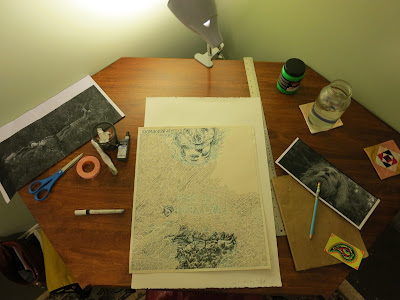 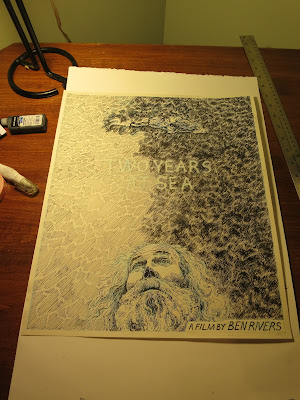 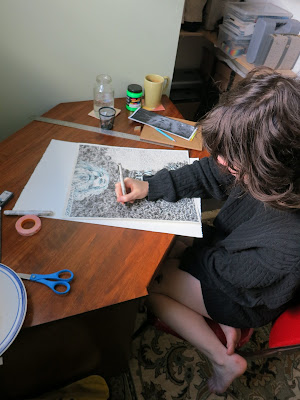 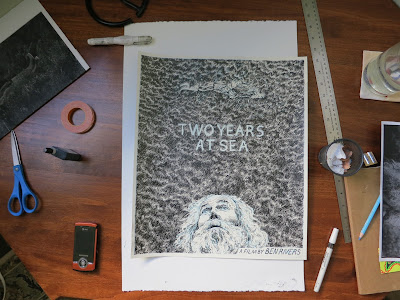 Experience it with me. Here's a video of me drawing grass.

Of course, I'll do anything to exorcise onto paper an image in my head. And once all of that texture was down, the feeling I was hoping for - of sweeping seas of dewey brush, waves like clouds, the rippled fabric of a dream background - all of that came together, ultimately uniting the surrounded subject(s). The grass, rendered from a film still, became abstract in its repetition, morphing freely, assisted by the upset in directionality. It was time to frost the tips. 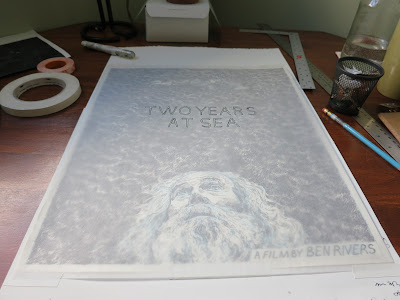 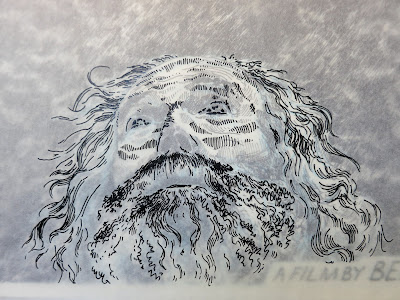 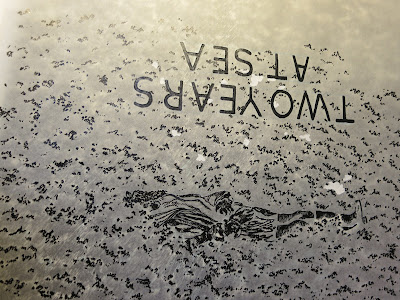 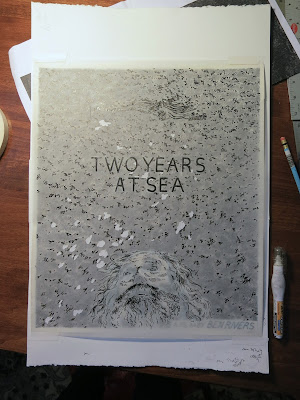 This transparency bears the highlights. It's always funny to draw what will be white in black ink. Unlike a film negative, or a solarized image, the technique in this form retains a hideous goofiness.

Having completed the drawings, I scanned them, enlarged them, and printed them to some fine paper. I sent Ben Rivers' distribution company a run of 25 prints, and gave one to the box office at the Siskel, where it hung in the lobby for a week. My only regret at this point was my paper selection. When I came up with the idea for the ink color and paper scheme, I imagined a darker grey than was available in the size I needed. Luckily, Ben requested I print him a second run for his personal distribution, offering me the chance to buy slightly smaller, darker paper. The blue tint of this version lends additional nautical flavor. I'm very happy with it. 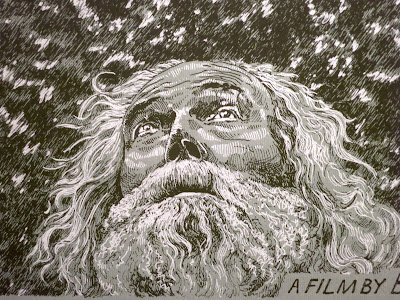 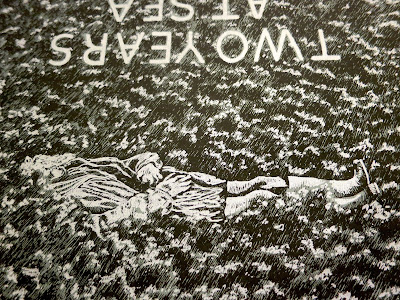 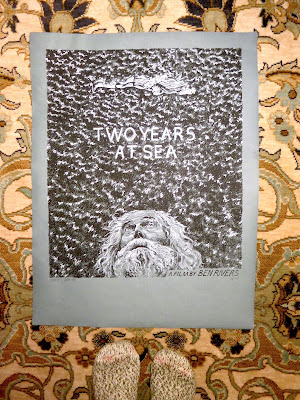 
The night awaits the warm orb of the coming sun with desperation tantamount only to your yearning for the new year’s first performative comix reading. Six brave artists breathe fire into their creations, bringing them to NEW LIFE! Witness miracles: a trembling science fiction, a devastation, a sweet song, a game, a meditation. All this and more courtesy of:

(I made this poster with Jenna Caravello. We worked out the building together, she drew the tiles, the people, and the outside, I drew the lions, the plants, and the text. I colored it all last night and this morning in between shooting 288 slides for my reading. I'll be helping Andrew Ghrist screen print it today. Soooo tiiiired.)
Posted by Lyra at 10:42 0 comments 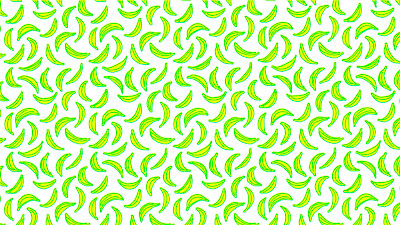 It's been awhile. I've made a lot of stuff, hopefully I'll find the time to show the world soon. In the meantime, here's some 'digital wallpaper' culled from the background to my new comic Banana Glove Game, which will be published in Lumpen later this month, and which I will be reading at Brain Frame 10, on January 18th. Enjoy the banana madness. I only made this 'digital wallpaper' because every time I see 'digital wallpaper' the fact of its existence makes me laugh so hard. (A tangent: House Fuck was named House Fuck because the idea of an experimental 16mm movie called House Fuck made me laugh so hard.)
Posted by Lyra at 13:53 0 comments