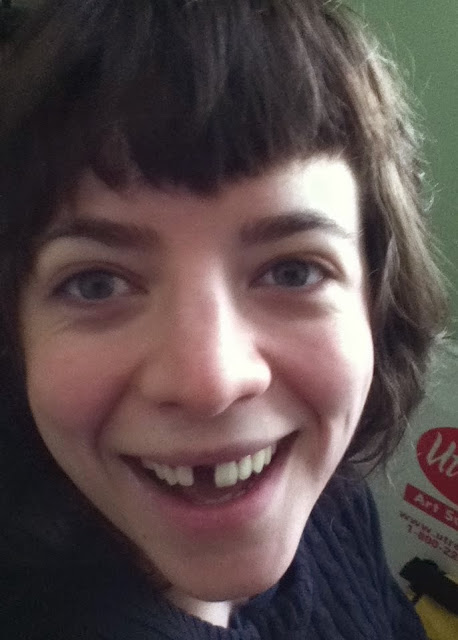 An important period in my life has recently come to an end. Eighteen years ago, at age eight, I skidded down a hill on my face, knocking out both of my front teeth and shredding my nose, lips and hand. I was on my way home from buying candy. Both incisors were inserted back into my mouth. The left one took, the right one died slowly, over three years. In 1998 this long, grey front tooth was pulled, leaving me with a flipper (a tooth attached to a retainer). In 2005, a year out of high school, I was assigned braces. They strung my falsie up with the others, sans anchor. I would flip it in circles for fun. In 2006, just before moving to Chicago, my braces were removed. My dentist glued the fake into a semi-permanent 'Maryland bridge,' cemented to its neighbors in the rear. Slowly, for seven years, it wore down into a shorter stump, straining and elongating the teeth it held on to. Finally, last summer, my new dentist and I initiated the surgical process of a permanent implant. 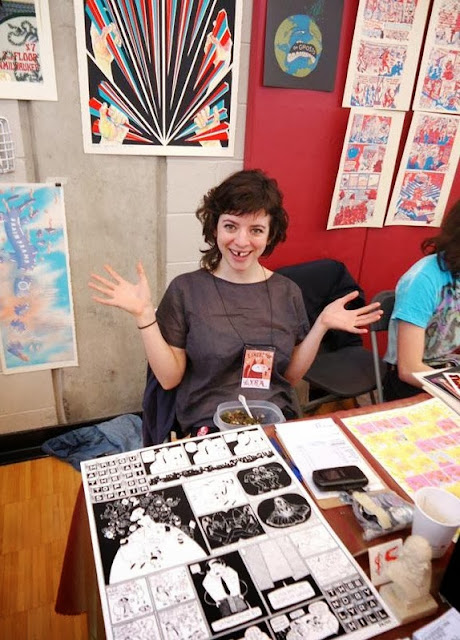 At CAKE 2013. Photo by Marnie Galloway

In June, one week before the Chicago Alternative Comics Expo (CAKE), my dentist and his friend the oral surgeon removed my Maryland bridge, cut open and peeled back the gums across half the roof of my mouth, scraped my upper jaw bone and then drilled into it with a titanium screw about 2mm thick and 2cm long. Over the next four months, my bone would grow through the tiny hole in the tip of the screw, securing it permanently into my upper jaw. This surgery was difficult. Local anesthetic doesn't help with immense skull pressure, or horrifying sounds. I like going to the dentist, and I ask a lot of questions. For once, I wished I hadn't know the details. 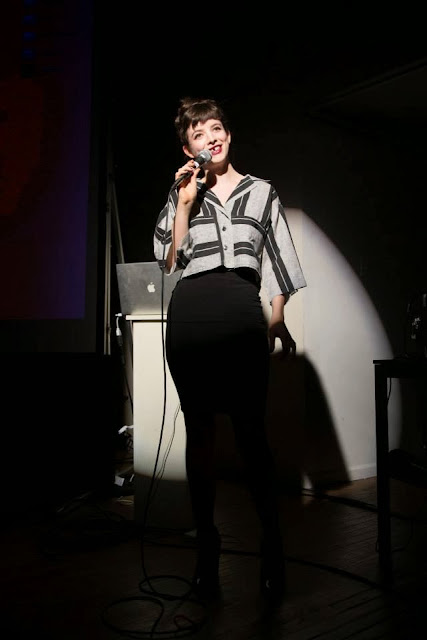 After stitching up my gums to cover the end of the screw, I received a temporary fake. This one, instead of a retainer, was a full upper Invisalign-style clear case, with a thin white veneer where my gap tooth sat. I left the office wearing it but it had filled with blood by the time I was home. It looked like shit and it hurt so I left it out for a few days. (Then I broke it - more on that later.) When I returned to get my stitches out, I received a new temporary - another flipper. I wore it sparingly. 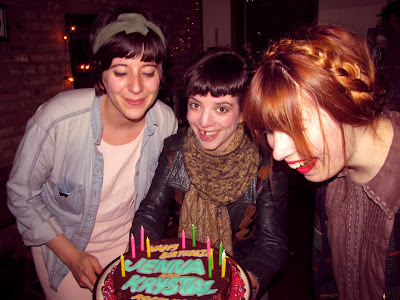 I made a cake for Jenna's and Krystal's birthday party. Photo by Eric Rivera

Just before Halloween, four months later, I returned to my surgeon with music and headphones. I didn't want to hear the jaw scraping gum ripping again. (Sounds like velcro.) He seemed skeptical, and I felt foolish when he completed the follow up procedure in twenty minutes with no gross sounds. I guess it's much less invasive to fold back gums and screw a 'healing cap' on to the tip of a protruding screw. This silver button stuck out just past my gum line for the next month, a touch of cyborg, molding a nice seat for the eventual implant. 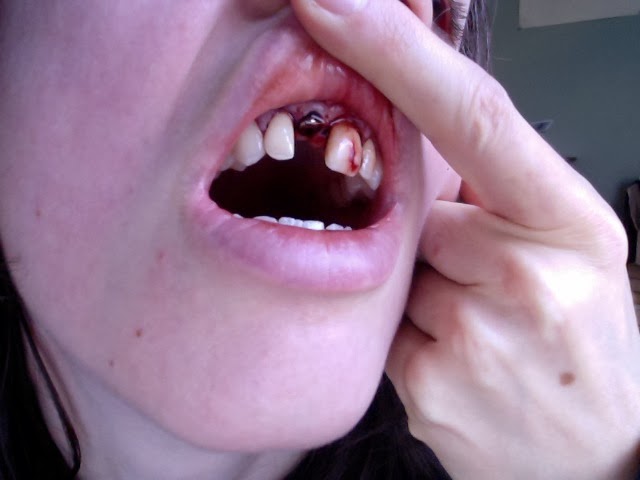 A week before Thanksgiving I returned to prepare the adjacent teeth for crowning (they were damaged from the bridge) and to take impressions for the tooth sculptor who would be manufacturing my implant. My dentist shaved down my pre-crown teeth into little monster stubs. The left one started throbbing and turning red. I reminisced about the accident and how that tooth had hung by a thread before effective reinsertion. "Ah," said my dentist, "I wish you had told me this before. Once a nerve cavity is damaged like that, it will never be right again. You probably need a root canal." 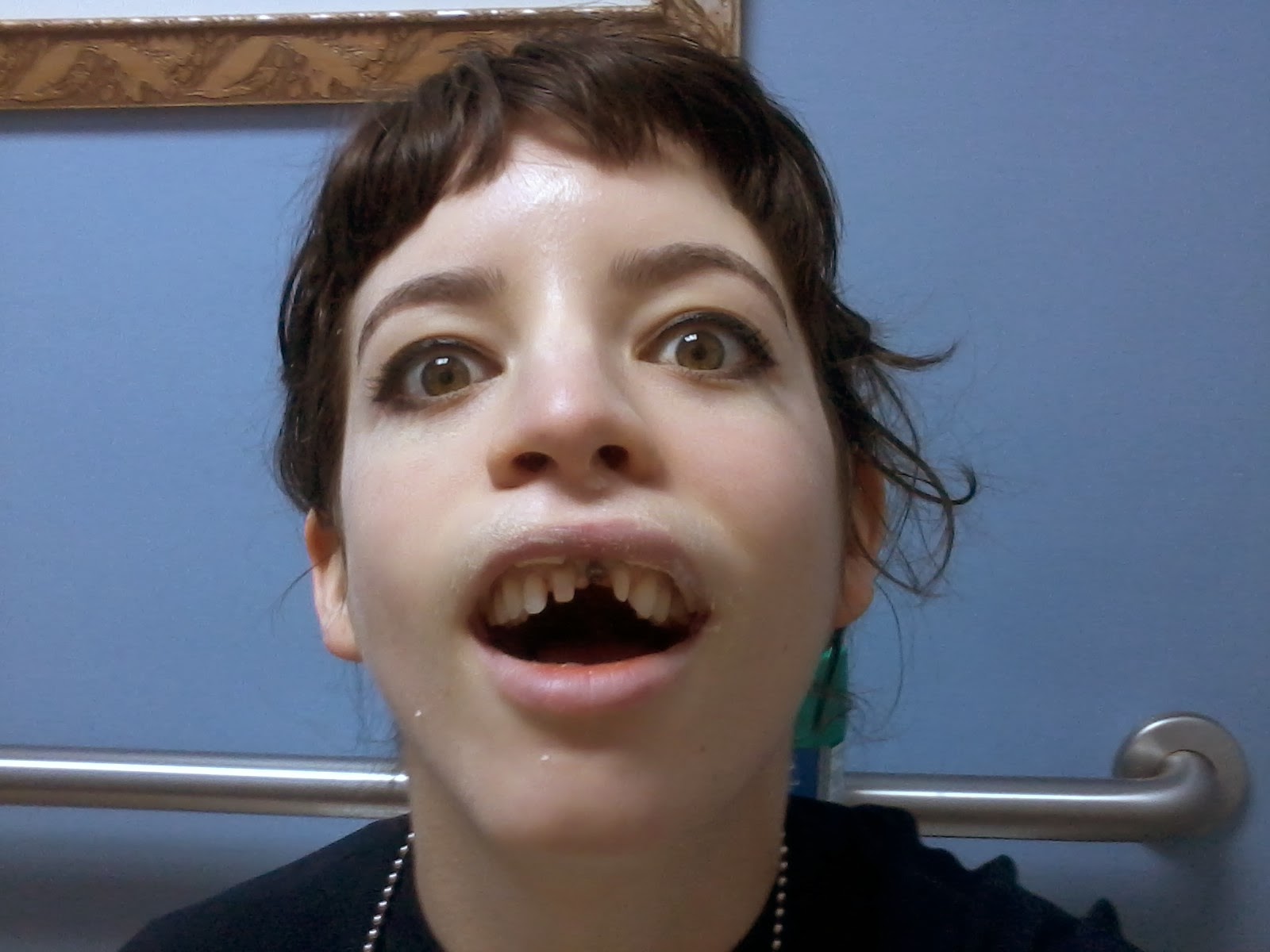 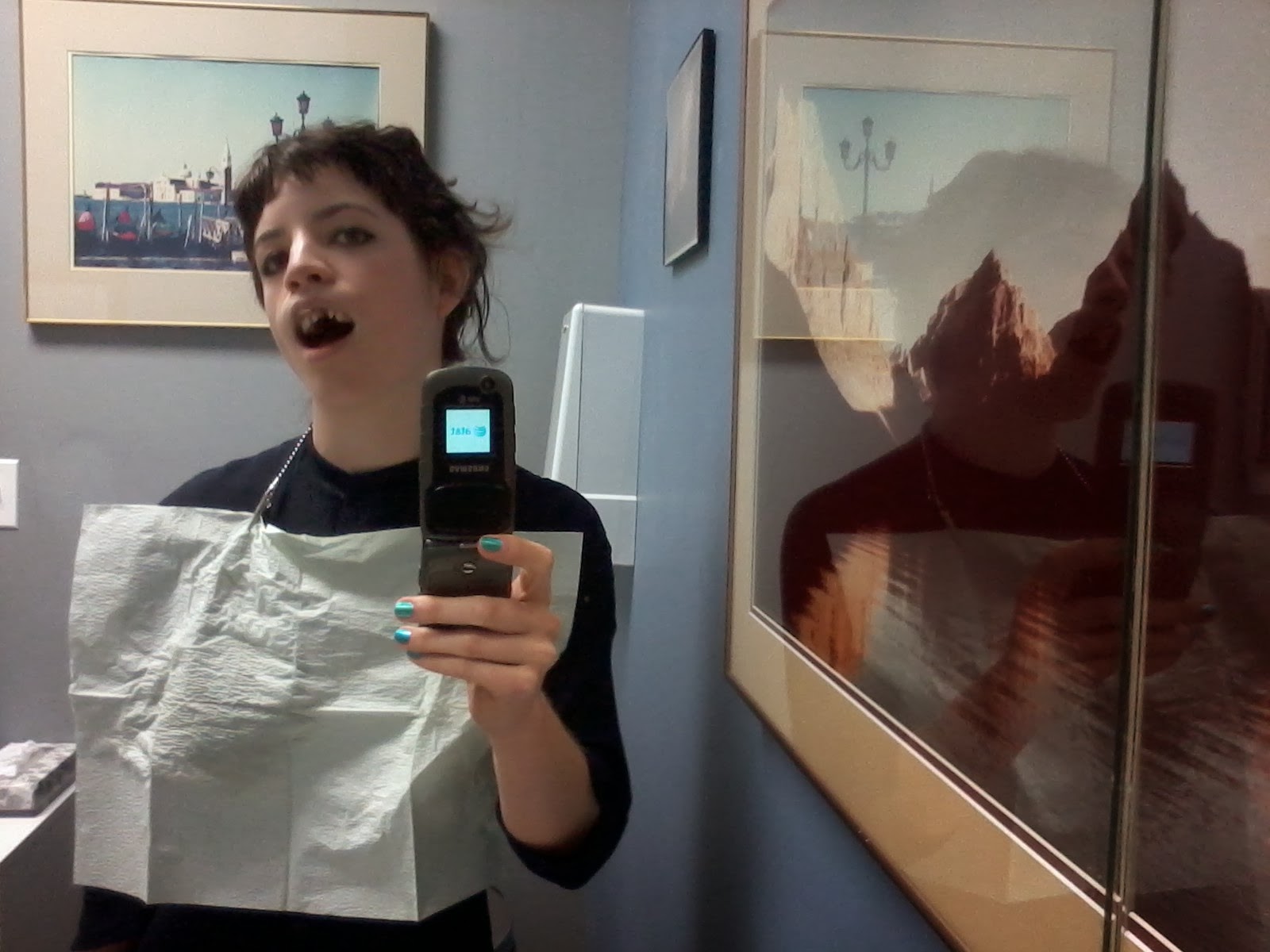 Bathroom 'selfies' at the dentist's office

He left me with a temporary plastic bridge in the traditional form. The bridge was loose and my cyborg cap visible above it. Whenever I breathed in too quickly, searing pain struck through my front stub. I went in a week later for my root canal.

"I don't usually do this," he said, in the middle of the procedure, "but I think you'd get a kick out of it. Open your eyes." He was holding my swollen, half-dead nerve in front of my face. It was awesome. So tiny and gelatinous. We have a good relationship. When I asked him to use my phone to take some pictures of the hardware he was screwing into my face, he acquiesced. 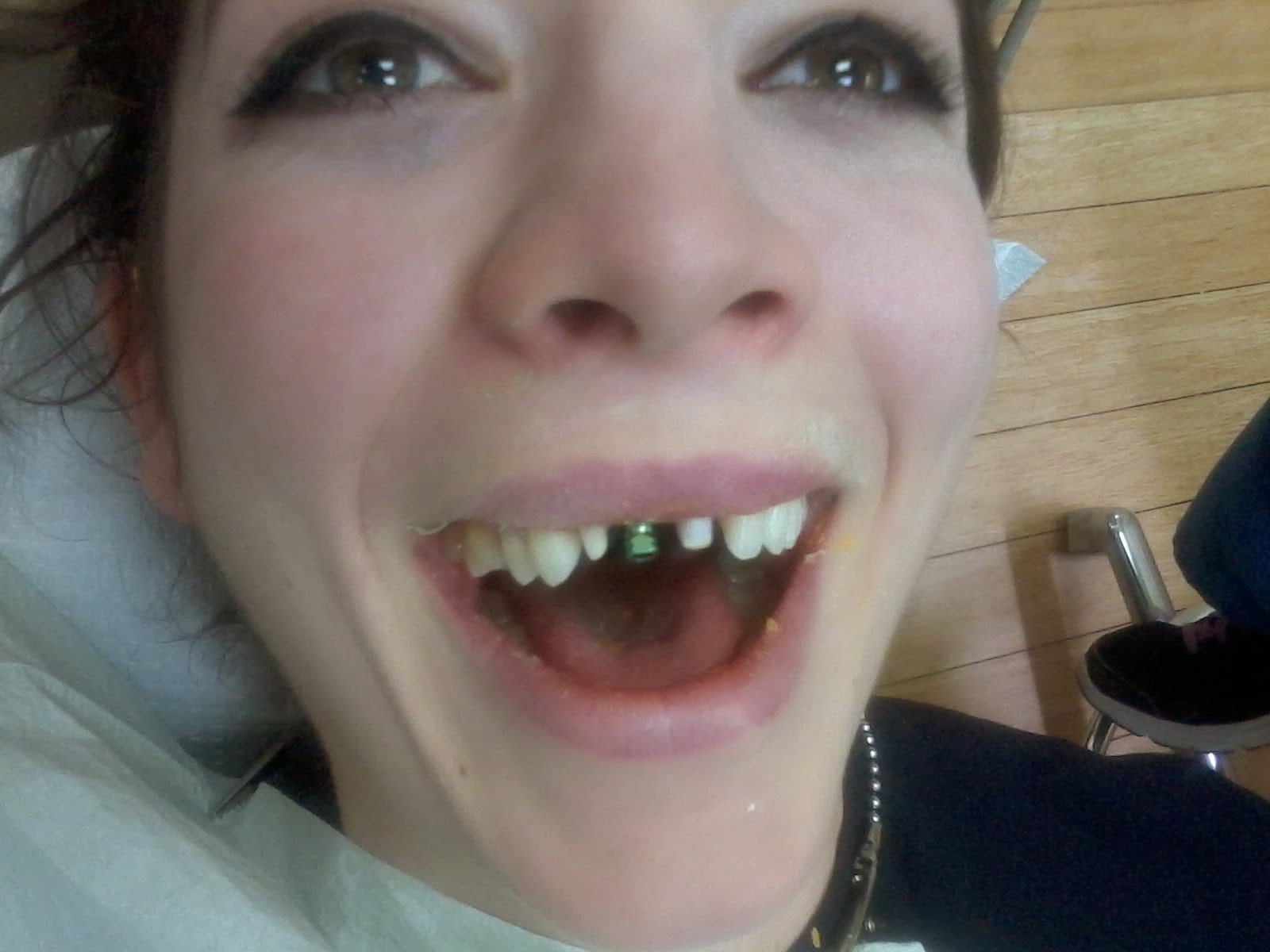 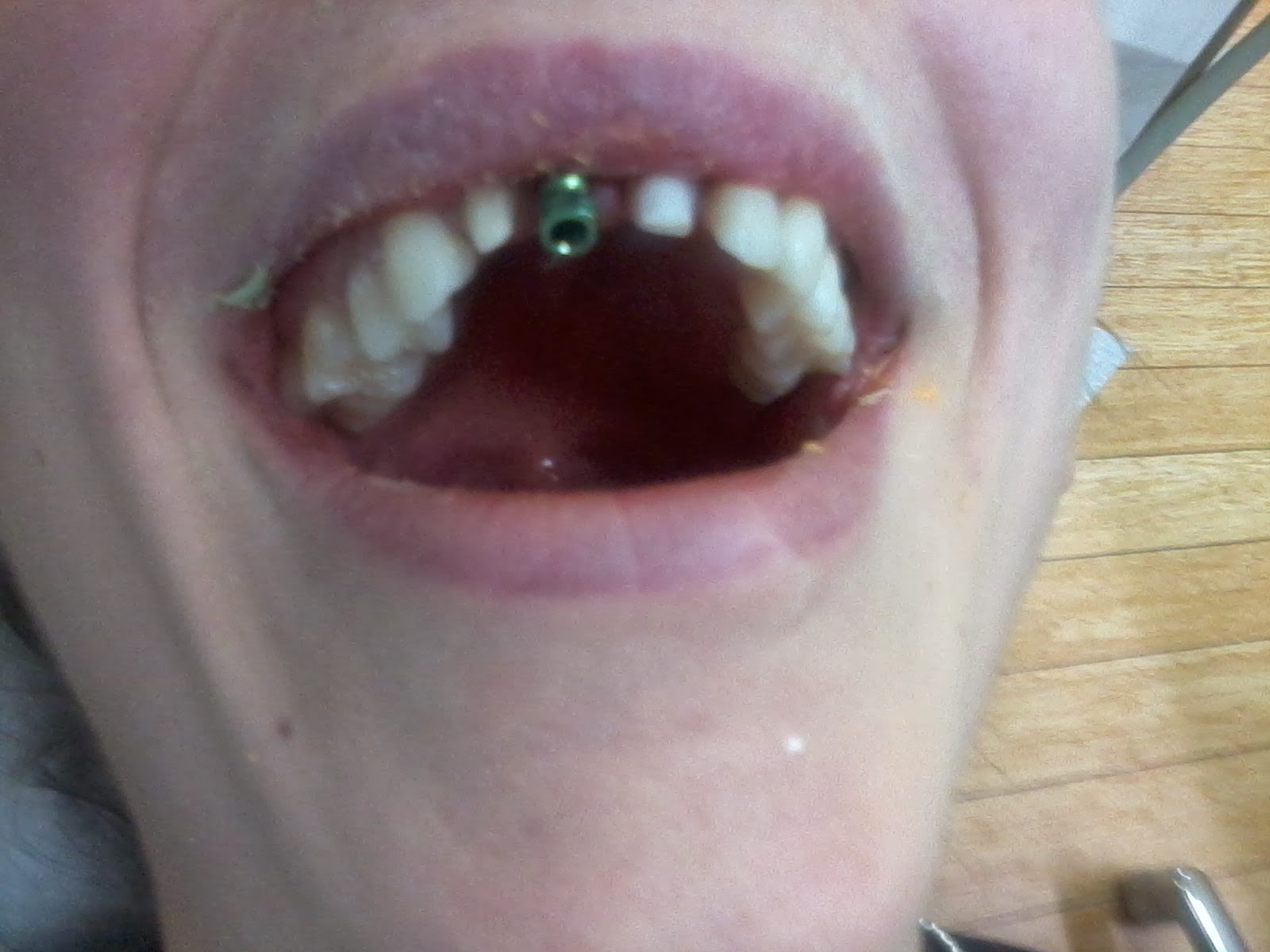 I was in and out of the office about twice a week all December. Finally, on the 26th, I received my permanent teeth. I had to return the next day because the cement in my implant came loose. But it's in there for good now! I have my front teeth, for Christmas, like I've always wanted. 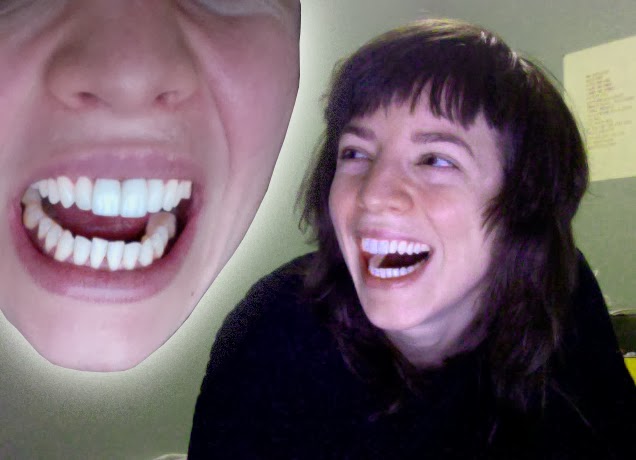 This is the only art in this blog post

A lot of people get dental implants. You probably know at least two people who have dental implants. I heard, during this process, about many sympathetic experiences. A bartender, returning with my change, covertly slipped her flipper to show the same missing tooth. I wanted to write this post because it's a big deal for me - eighteen years is a long time to worry over something - and because of what I learned from choosing to be toothless for two seasons.

When I had the option, between sixth and twelfth grade, of bearing my true grin, I didn't. I only took out my fake to play tricks on people. Once, as a sophomore in high school, our spirit week theme was 'pirates.' I dressed elaborately and left my tooth at home, but in class I was too shy to open my mouth, uncharacteristic for a know-it-all.

After the surgery this summer, I thought it would be the same. I couldn't wear my temporary at first, for the blood and stitches. Tyson took me to get ice cream. Ordering my sundae, I felt sheepish, infantilized. I was terrified above all that Tyson, my partner, would find me gruesome. Getting over this (unfounded) fear was the hardest part.

It's not hard for me to approach people, especially at alternative comics conventions. Toothless, it was even easier. People let their guard down as soon as we started talking. An interesting topic was always at hand. Funny faces were ten times as effective. Facing off with Patrick Kyle during the Comic Art Battle, I removed my tooth to psych him out (we were drawing cruel portraits of each other) and won.

I became comfortable socially as well as physically, leaving my gap agape. Interactions with cashiers, postal workers, servers, bankers, and other anonymous members of society remained unchanged. Friends and coworkers, people already at ease with me, were the only ones with probing questions and astonished looks. 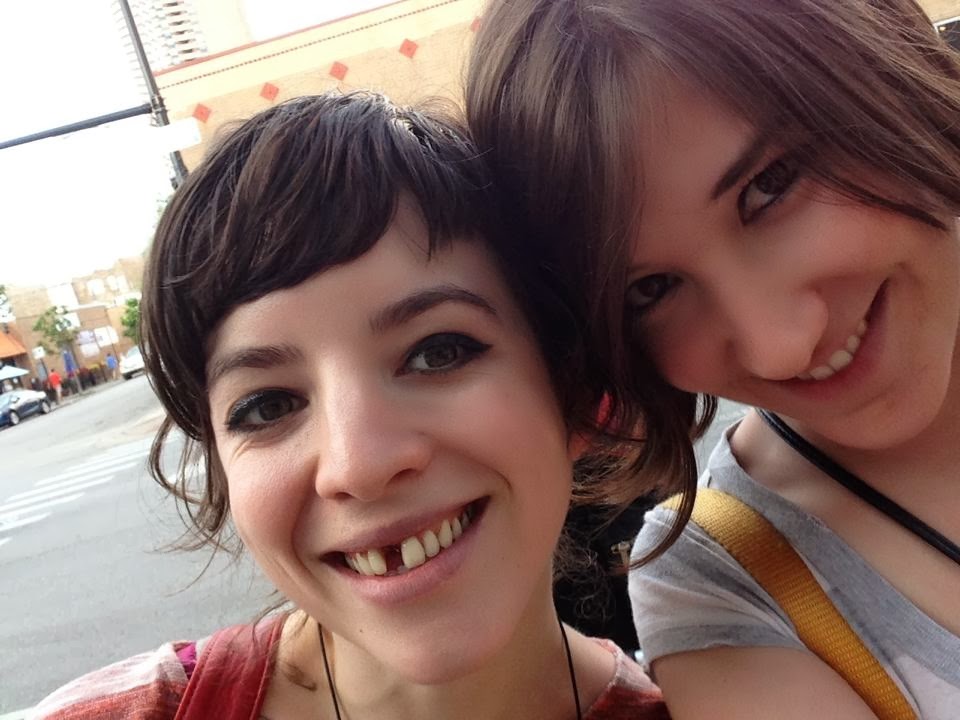 In fact, the only insulting conversations I had regarding my willful toothlessness were with my dentist and his employees. They did not get it. "I would be humiliated..." "you're so beautiful with teeth..." "we have got to get that fixed!" I felt as though, taking pride in my non-conformity, I hurt their feelings. 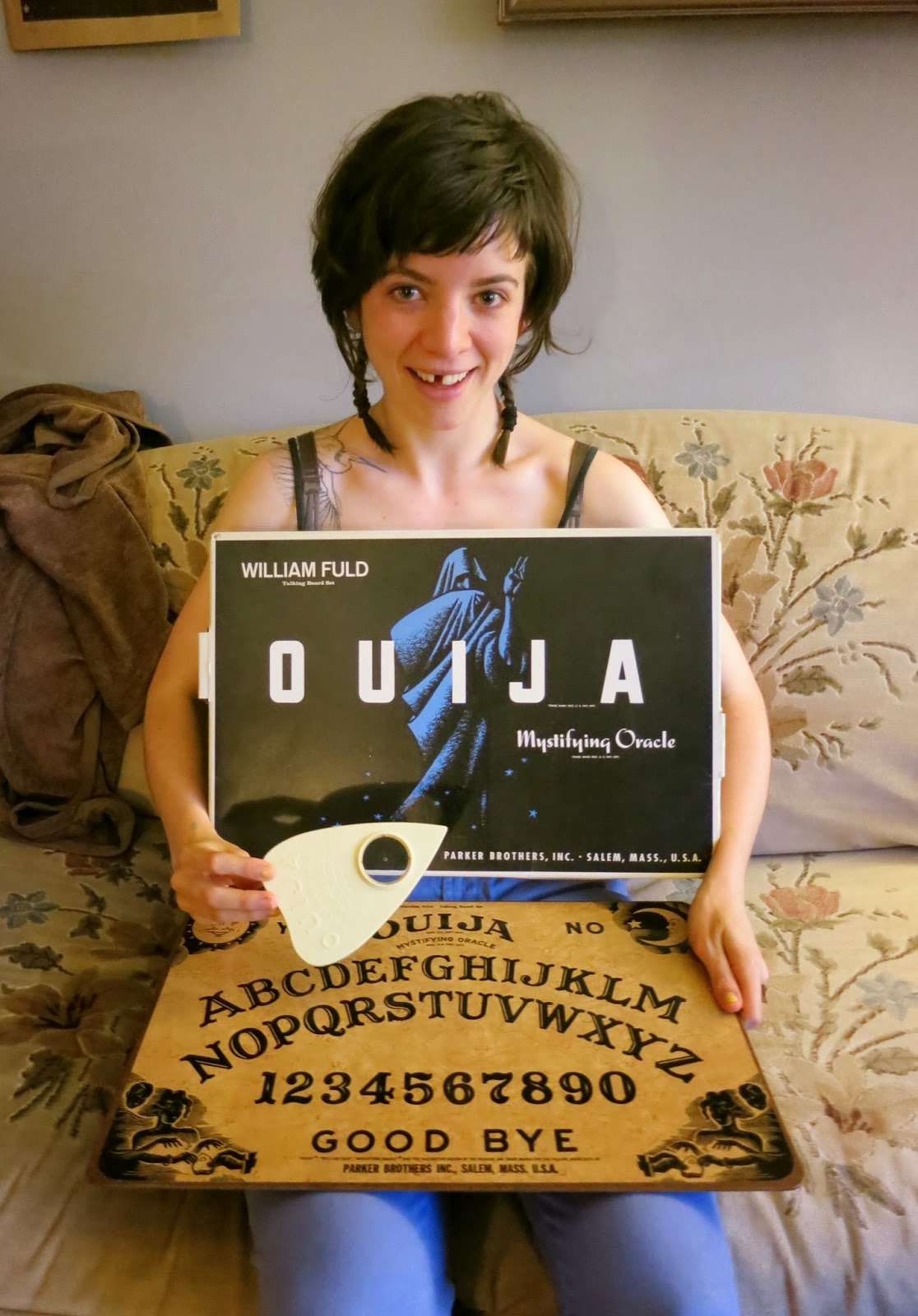 I did wear my flipper for special occasions, like emceeing Brain Frame Lit and Brain Frame 13. The day I got my replacement temporary was the day I shot my Kickstarter video. In these situations, I wanted to remain focused, and I wanted my audience to focus on my presentation, not my mouth. And, I had to wear it occasionally to keep my teeth from shifting.

It was never truly easy. Every day I made a decision. At Brain Frame 14, I emceed without my tooth. I doubt anyone noticed, but that took a lot of guts. (The gap was noticeable, not my guts.) I enjoyed dressing up toothless, for a gay cruise, for my birthday dinner. I was acutely aware that the power of my toothlessness, the element of surprise, relied on my existence as a young, white, put-together woman. 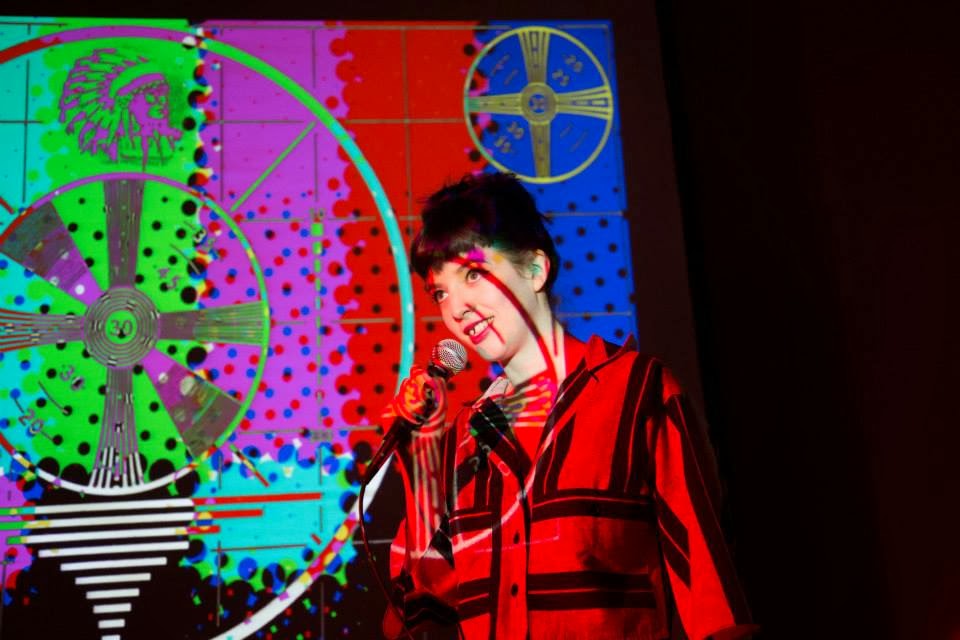 And it was from this incongruity that I drew strength. Preparing MOCAD for Detroit Brain Frame, in a space I'd never been directing people - mostly men - I'd never met, I went toothless. Because I wanted to be an unknown quantity. As a woman in charge, who works extensively with audio visual equipment and freely exerts physical strength, I am hyper aware of bias against feminine competence. When I am presenting for the first time to a new crowd, or to a new individual, I have something to prove. Without a tooth, the proof is immediate, it goes unsaid: She is different. She doesn't care. I can't dismiss her. On the Ryley Walker shoot. Photo by Ryan Gleeson

As the completion of my surgery neared, I grieved. A full, cosmetic smile for the first time in my life - how insincere! And what a relief. I don't miss the health concerns, exorbitant cost, and physical discomfort. My toothlessness came at an important juncture, during months of unparalleled ambition and increased visibility. I am grateful for the security it provided. Ultimately, it was like Dumbo's feather: a 'magic' talisman. When Dumbo looses his feather he thinks he can no longer fly, but he can! He could all along! I was always weird! I still am! A toothy grin also disarms.
Posted by Lyra at 09:19 4 comments