WIGGLE YOUR WAY TO BRAIN FRAME 9 ON NOVEMBER 16TH, which is a FRIDAY, at 9:00PM. You just make your way to 1542 N MILWAUKEE and go up to the SECOND FLOOR, then pay SEVEN DOLLARS to see:

I drew this poster in record time with the very talented Joe Tallarico. Ghosts and background psychedelia courtesy of Joe; floating Escher castle, text, and color courtesy of myself. I'm getting better at planning the number of transparencies needed for each poster. Joe finally convinced me to use non-photo-blue pencils, for which I am thankful. Show up. Get down. Perhaps I'll post pictures of the transparencies soon. Happy Halloween.
Posted by Lyra at 09:00 0 comments 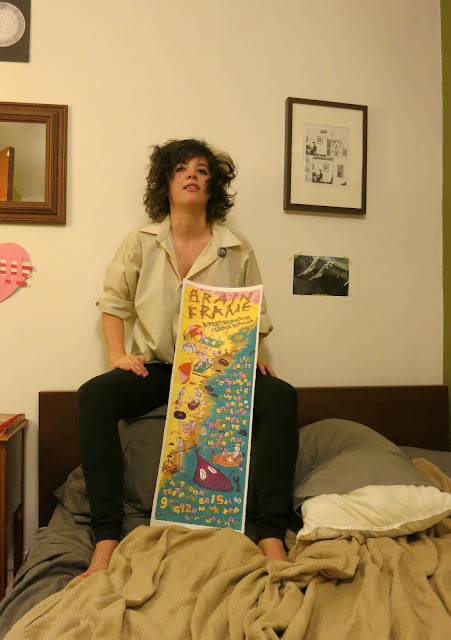 Becoming a screen printer was an accident. I learned how as one among many skills during an introductory fibers class. I started out with stencils, printing on fabric. All I knew about paper screen printing was the difference in mesh count; regardless, I ended my days in the fibers department making excuses to print books, on paper. 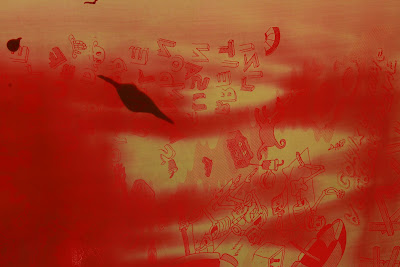 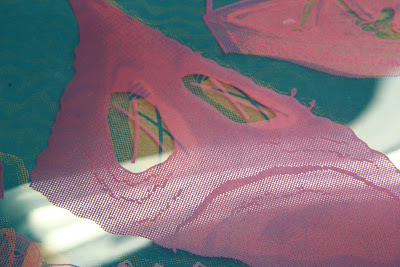 I've always liked screen printing. I spent an entire holiday vacation scrapping together two screen printed gifts (one fabric, one paper), completing one step of the process at each home-state vacation-spot. I even got paid by some company, one time, to screen print bulk shirts at an event at the House of Blues. On my way home I passed a woman in a fancy dress lying on the sidewalk and vomiting. I learned the rest of my screen printing skills in Offset class. 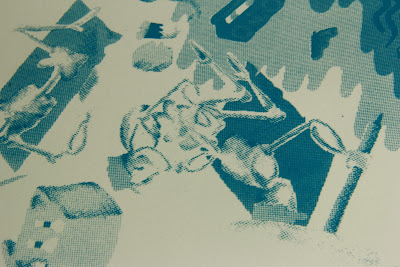 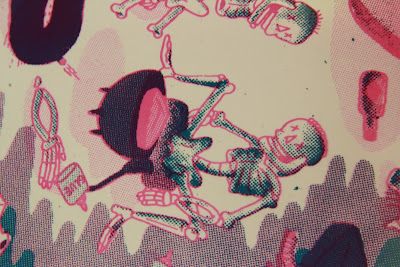 An offset printer, just like a screen printing human, lays down one color at a time. It can print with any kind of ink: metallic, fluorescent, opaque, transparent, matte, glossy, etc. Unlike most screen printing humans, it easily handles a high volume of paper with maximum precision. Most contemporary books of color, especially professionally printed comics, are offset. Generally, these jobs are printed CMYK:  Cyan, Magenta, Yellow, and blacK being four standardized tones (or 'process' colors) that combine to depict a full spectrum of color.

The best way to combine process colors is to utilize halftones. Halftone dots are little spots of one color, organized in a grid, which are bigger or smaller depending on what percentages of that tone are needed in different areas of the image to make up the many-colored whole.

Taking advantage of CMYK yields a full spectrum of color, sure, but what if you only want to do three color layers? Or you want your print to look weird? Then, you can do what I do.

These are the color files for screen printing the Brain Frame 8 poster. From the left: the file for a dark magenta; a warm, goldenseal yellow; and a bright turquoise-cyan. Click on 'em to see all the itty-bitty halftone dots.
Very early in the BF poster process, I decide which 'spot' colors (any non-process color, which is to be combined in the manner of process colors) will be used for the final screen print. Simon Allen and I agreed that we needed rich tones for the sand and the water. Choosing a dark magenta as our third ink made sense for a few reasons: being the darkest color, it would effectively emphasize the line work (acting as a stand in for traditional black outlines) and, in combination with the blue and yellow, it would yield a near-full range of purples, oranges, and pinks.

Keeping our spot colors in mind, my collaborator and I then begin drawing all the different pieces of the image.

This is the original draft of the BF8 poster, penciled and inked by Simon (who took all the screen printing photos in this post) and myself. Very little of this draft remains in the finished image.

Each successive draft of the poster was drawn on thick transparent vellum. Simon inked the page above to give me cleaner, more precise character outlines. I ended up subtracting his drawings of the dunes, preferring to leave the divisions between sky, water, and land to the color fields from which they would be composed.

I asked Simon to pencil another transparency with shading. Unlike the BF5 poster, which otherwise bears a similar creation story, I wanted every object separate from the background to have organic dimension, instead of flat color fields for shadows. Because the contents of the objects would be printed in different colors than the outlines, I needed them on a separate sheet of paper.

The purpose of this page was not line work, but shape separation. Very few of the lines drawn above are in the finished piece. They exist, rather, to define the boundaries of sky, sand, wet sand, and water; and to more easily identify those areas occupied by foreground objects. Drawing these borders saved me from tracing the outline of every character and every piece of trash on the beach in Photoshop. Instead, I was able to quickly select these areas and save them on a separate layer. This freed me to draw the background without having to avoid all the stuff on top of it.

Another advantage to making all these transparencies is the ability to draw a certain part of the image over and over without having to erase it - you just pick which version you like best. On this page, obviously, I drew all of the background textures. You can see an early version of the clouds, which was rejected for the version on the following, and final, transparency:

You may also observe that I was vastly unsatisfied with my rendering of folds on the giant dead sea-raisin. I think there are four different pages with sea-raisin folds on them. I ended up compositing a few different versions in Photoshop.

Those squiggles are more sea-texture that I ended up not using. The blobbly shapes on the left are the shadows beneath larger objects on the beach, and the black wavy shapes at the top are the shadows which define the dunes.

After scanning in all of those transparencies, cleaning up the layers, isolating objects and choosing colors for everything; after figuring out what percentages of which spot colors are necessary to amalgamate the rainbow of hues I desire; after compiling those percentages into three greyscale files and converting them into halftone dots, resulting in the three B&W images near the top of this post: that's when I put the B&W files back together, replacing the black in each file with its respective spot color, to test my work. The image above looks different than the web version of the poster (visible here). That's because it is a digital mockup of the screen printed version of the poster. It's really worth looking at up close. 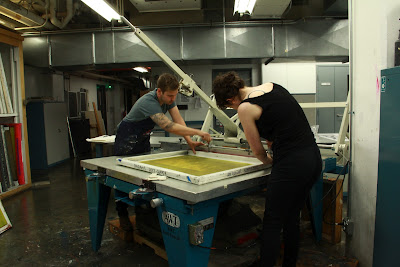 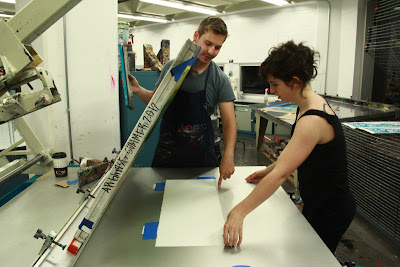 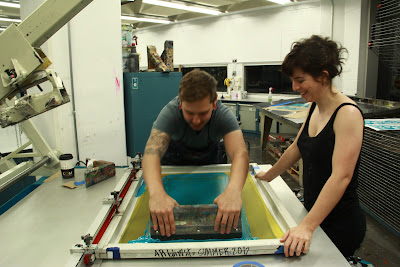 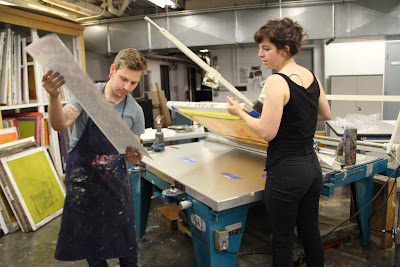 That's me and Andrew Ghrist. We are an unstoppable screen printing team. We are both fast, strong, obsessive, and neurotic, with painfully high standards. 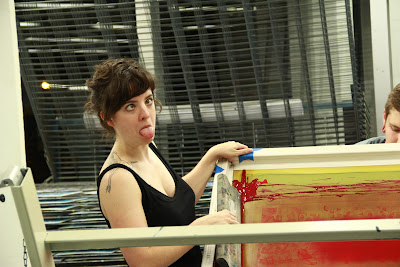