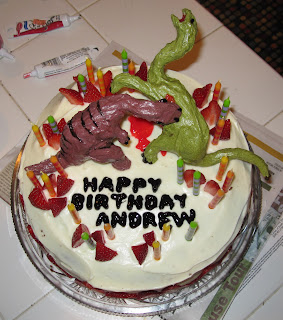 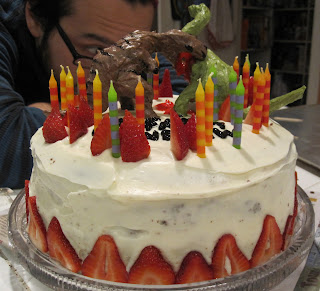 Back in April (around the 26th, to be exact) Andrew had a birthday and I made him a birthday cake at his parent's house in Grand Rapids. Andrew likes dinosaurs. 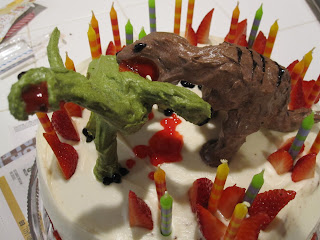 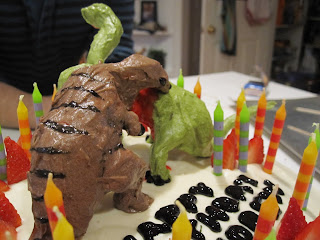 It was supposed to be a surprise but then the time spent making the dinos became too long of a period to exile Andrew from the kitchen. They're built around tin foil armatures, covered in butter frosting mixed with food dye. Andrew's cousin Donny helped decide on the right prehistoric skin/scale tones. 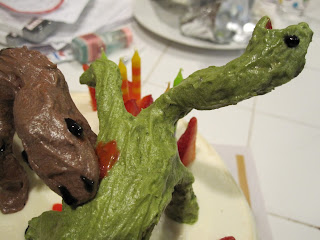 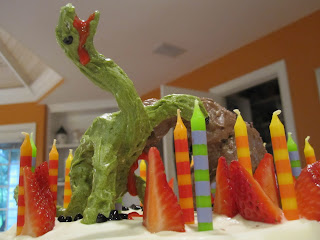 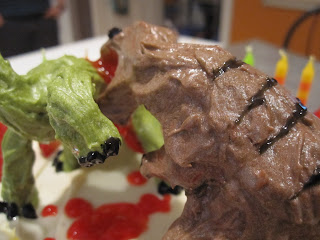 The blood is made from that colored gel stuff you can buy at the cake-decorating section in any big grocery store. The nails and eyes and stripes are black gel stuff, applied with a toothpick. In some pictures you can really see the dynamic, violent action and exquisite pain in the face of the green dinosaur. You really feel the cake.
I got the candles at that fancy-ass pastry counter at Whole Foods. And the cut up strawberries are supposed to be exotic plants. 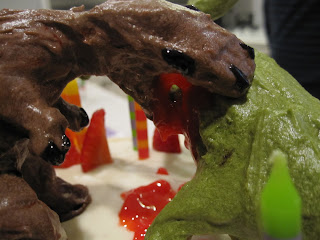 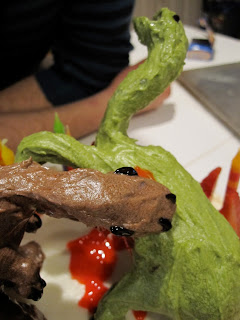 It is a chocolate beet cake with cream cheese frosting, and gluten-free for my crippled celiac self.
Posted by Lyra at 20:30 0 comments 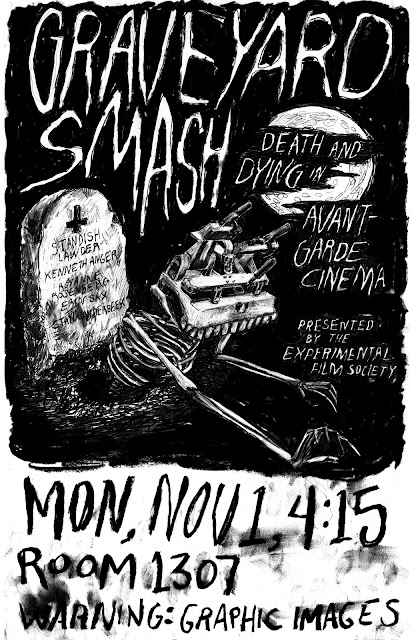 Another EFS screening poster. This time the figure's head is a cement splicer with teeth. Spooky.
Posted by Lyra at 00:23 0 comments

What have I been doing? I hear maybe one, maybe no one ask. Well, here's the answer: I've been planning for bigger and better things! I've been working on finishing not one, not two, but three films! I've been reorganizing my house! I've been reading a lot of feminist literary theory. This has been the main activity. And also... I've become Co-President of the Experimental Film Society!
Ross, Randy and I have organized a tight schedule of screenings and meetings throughout the semester. Every alternate Monday we're screening an hour-long series of 16mm experimental films, and the Mondays between those we're meeting with fellow students for workshops on shooting, hand-processing, and other ways of manipulating the materiality of moving pictures. One of the tasks that I have volunteered for specifically is creating fliers and posters for each of these events. Observe: 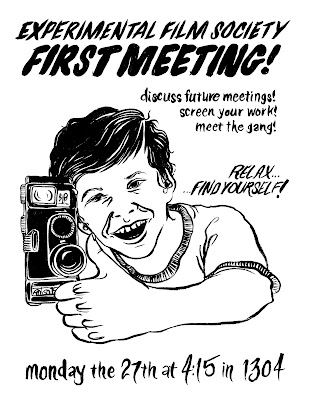 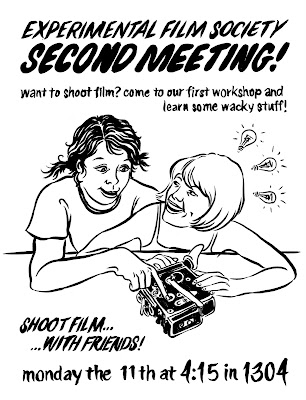 I'm attempting, with the fliers for the workshops, to project the absolute friendliest face possible. I think the cheesy wording and pictures of kids having so much fun is really funny in an approachable way, which is constructive considering the reputation for purist elitism that haunts the tired argument between film and video. 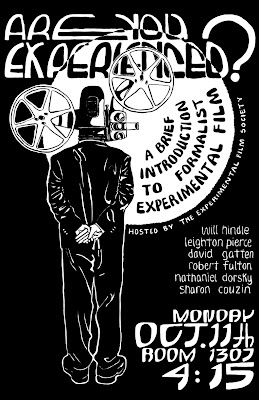 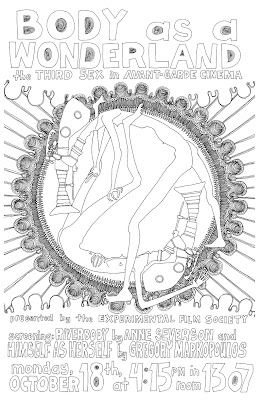 With these posters, I'm exploring different styles purely for my own interest and pleasure, with the consistent thread of camera/projector-headed figures. I'm not actually a fan of the Are You Experienced poster - the design ended up muddled and confusing, with too much black and too much in general. While there are good things about it - I really like that font I made up in the lower right corner - on the whole I wished I had turned it out completely differently. The second poser was an effort towards lightness and legibility, without losing any of the interest.
Posted by Lyra at 22:04 5 comments