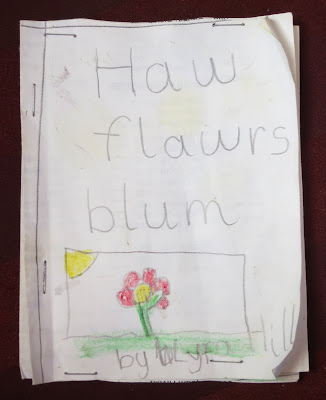 This is a book that I made, probably around age 5. It has always been special to me. However, after I started making comic books, I revisited this 'piece' and realized that it is probably the first comic book I ever made. So, yeah. I love this. 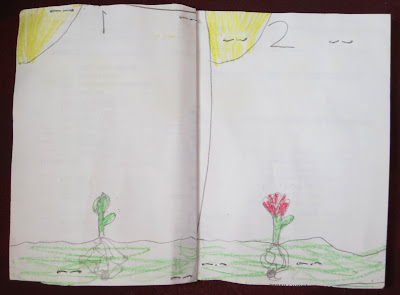 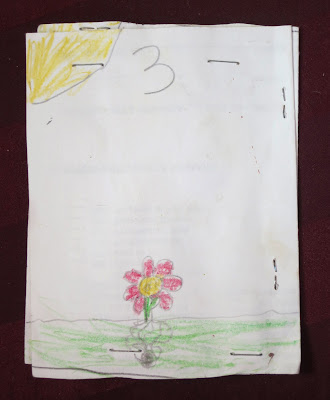 Brain Frame 8 is tonight. 9pm this time, that's a first, also, a keg. I am not performing. I was planning on reading the rest of Recent Days at this show, but then I realized that it would be almost impossible to finish a 150-ish page book in two months at the same time as organizing another Brain Frame, and planning a performance. The stress leading up to Brain Frame 7 was almost unbearable and incredibly unhealthy. So, the reading and release of Recent Days will now occur in January, at Brain Frame 10.

I've reevaluated a few big goals in recent months. Ever since my third year at SAIC, I've been planning to apply for a Fulbright to Iceland. I've wanted to visit Iceland since I wrote a report on it in sixth grade. I would like to make a film there, and I think, if I really gave it my all, I'd be a good contestant for the Fulbright award. My plan was to apply this fall, and then next fall, perhaps from Iceland, apply for grad school.

Of course, when I made that plan, I had no idea that in the fall of 2012 I would be running a compelling, successful comix performance series, or that I would be getting paid to teach filmmakers I respect how to optically print their footage, or that I would be receiving more and more requests for design work, or that my social and creative community would be so alive with passionate ideas and productive energy. So, I'm not applying for the Fulbright. Not right now, at least. And there's a good chance I will apply for grad school soon, but I don't need to think about that just yet; right now, I'm committed to Brain Frame, to finishing my next book, to producing more films. That's more than enough.

It was my birthday last month. Thorne Brandt made this gif for me. Tyson and I traveled to California for ten days. I shot five rolls of S8, which you can see soon, if you care to. Mark invited us to the Academy to a private screening of a new 35mm print (with stereo sound OMG) of Water and Power. Pat and Beverly O'Neill were there, with George Lockwood, and Kate McCabe. I was giddy to meet Pat, seeing as he's one of my favorite filmmakers. He and Beverly know me from Facebook, and, incredibly, they were excited to meet me too. We all hung out on the roof and everybody sang happy birthday, and then we went back downstairs and watched House Fuck and The Mystic in the small screening room. It was the best birthday I've ever had. 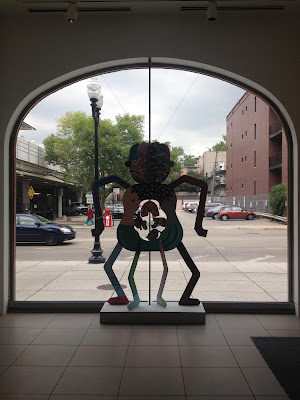 Last night was the opening of Afterimage, a show featuring and influenced by the Chicago Imagists, at the DePaul Art Museum, open until November 18th. This sculpture is an exquise corpse cobbled together by Trubble Club, including myself. I painted one of the faces: the guy with five rows of teeth. There's a wall of books curated by Trubble Club, as well. It's a wonderful exhibit and you should go.

These are photos of me on a boat, filming a wedding with my Super 8 camera. The film footage in the above video is what I was shooting. The video was edited by the glowing bride. If anyone wants me to film their wedding on a boat let me know.

REMAINING POINTS OF INTEREST FOR WHICH I DO NOT HAVE INTRODUCTORY PHOTO/VIDEO DOCUMENTATION:

1) One of my two jobs is as a project archivist at Kartemquin Films. Kartemquin is the social documentary production house that brought you Hoop Dreams and The Interrupters, among many other incredible films. The archivist team (or A-Team) has started a blog, and you can read my first entry here.

2) Hey, people in Hawick, Scotland, are you going to the Alchemy Film and Moving Image Festival? Cause you should. I wish I could go. And, if you show up at the Tower Mill on Kirkstile at 1:45pm on Saturday, October 27th, you will witness the world premier of my film The Mystic. It's a digital projection, for which I apologize, but it's also the world premier.

3) Hey, what's up Victoria, British Columbia! Are you going to the Antimatter Film Festival? You should. I wish I could go. And, if you happen to catch the last screening of the event, at 9:00pm on Saturday, October 20th, you will witness the Canadian premier of my film House Fuck. On film! Somebody buy me a ticket from Chicago to Canada to Scotland and back to Chicago. Oh, wait, somebody buy me a passport first.
Posted by Lyra at 11:51 0 comments