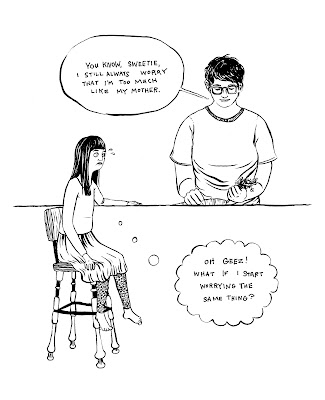 One panel memoir comic.
Posted by Lyra at 12:04 1 comments

It's Tearing Me Apart Another assignment from last semester: create two one-page comics, both telling the same story, one very quickly and one very slowly. This was my twofold interpretation of a colloquialism. It turned out really emo. Here's the second comic: 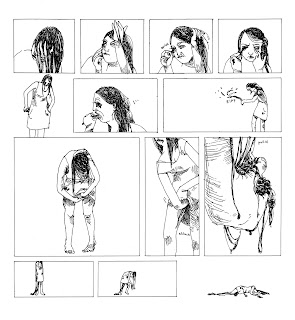 There was another row of panels on the bottom of this page when I originally drew it, but I never got around to inking them and then I lost the original (which sucks so hard- I think I left it in the copy machine). It showed the second girl (the head on the right, above) walking up and reinserting the first girl's eyeball into her socket. Without that piece of this brief narrative, the two comics don't relate quite as well to each other, but on its own I like the second comic better sans the final row. As a portfolio piece I'm very happy with the drawing styles and composition of both of these comics, but thematically I cringe when I look at them; as stated before, totally emo, and also that chick on the right looks like an anime character.
Posted by Lyra at 09:05 4 comments

Another step in my exploration of matting in and out of camera. I now am familiar with the school's optical printers, which is an ecstatic experience to rival that of being born again (not that I can speak personally to that, at all). Here's what I did to the footage above, of which there are three segments:

The first segment is just a positive print onto Hi-Con of my camera original, shot on Plus-X negative at the Lincoln Park Zoo, tape spliced together and timed for printing on the Oxberry Optical Printer. I hand processed the negative and positive and all other generations and variations of this film in my Lomo Tank.

The second segment gets into the point of this project, which was to create traveling mattes. What I did with all the footage was photograph it onto Hi-Con using various ND filters in order to achieve a very dark and a very light version of the image. I then rephotographed these films onto more Hi-Con in order to have the negative of these versions. I then created another strip of film by double exposing the positive, under-exposed matte and the negative, over-exposed matte (both hi-density, emulsion-wise, so that those grey areas of the camera original were blocked from being exposed) to achieve a matte which isolated the middle of the B&W spectrum. Then, I took three of these mattes - the grey isolation matte, the positive under-exposed matte, and the negative over-exposed matte - and rephotographed the negative three times, triple exposing another Hi-Con film strip so as to re-create the original image, but all jacked up by being separated into its varying gradations.

The third segment was created through the same process as the second, except instead of bi-packing the camera original with my three gradation mattes, I bi-packed a still frame of three different cloths of varying shades with each matte. So, the image is still there as well as the movement, but it is created entirely through three different still pictures whos shapes are morphing into different animals.
Posted by Lyra at 10:00 0 comments 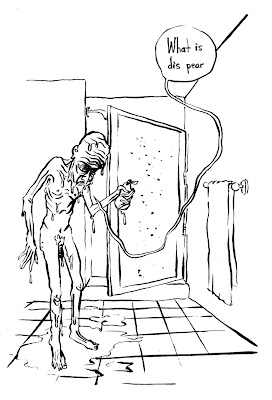 One of the very first assignments in my most recent comics class was to create a ton of one panel comics. (We started here, then moved to strips, then one page, etc.) 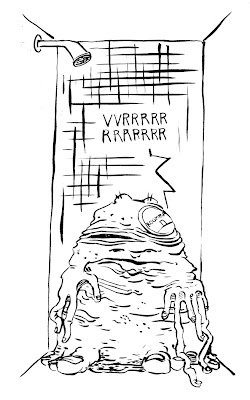 We had to make ten different one-panels, using five characters and five settings that we also had to do multiple drawings of. 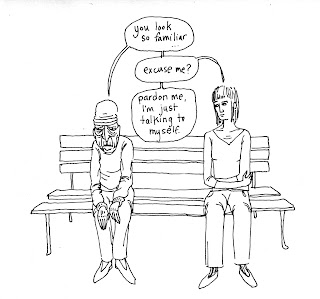 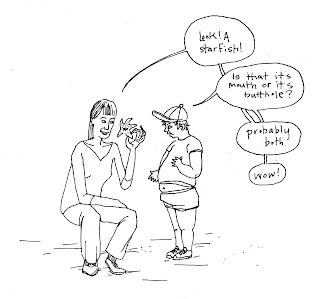 I came up with a little boy, a skinny girl, an old man, a mermaid, and a gross blob thing. 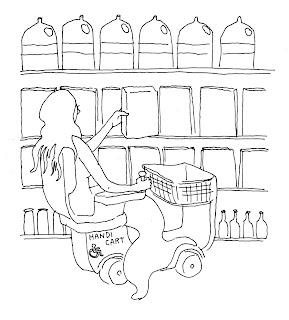 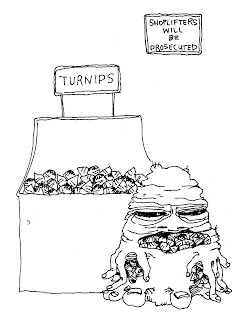 I left out a couple of my ten one-panels because they were really terrible, but these ones I thought were ok, and I was pretty amazed that I got them all done in one week. 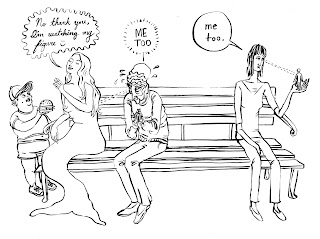 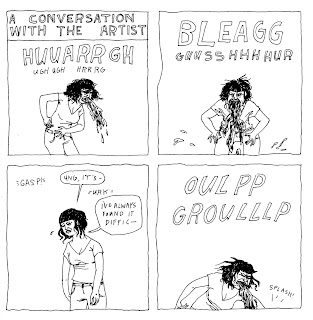 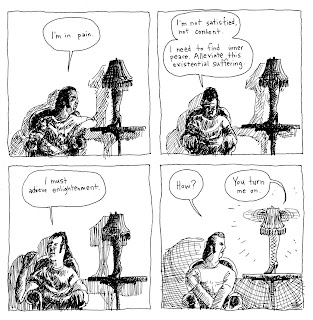 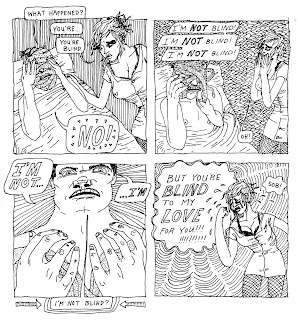 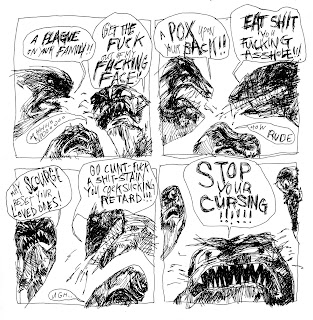 I like these guys at the end. I don't know what they are but when I drew them I was just thinking of them as 'angers'.
Posted by Lyra at 11:31 0 comments

They Glistened Above All Else 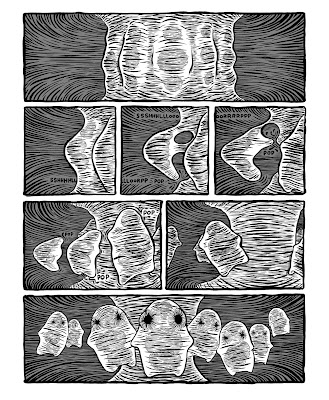 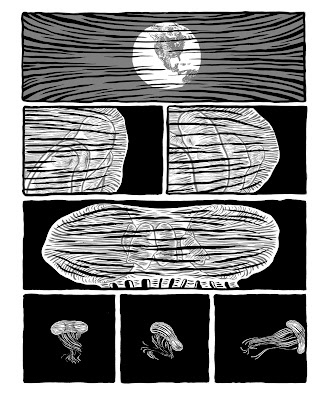 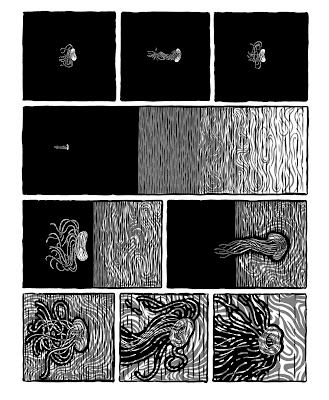 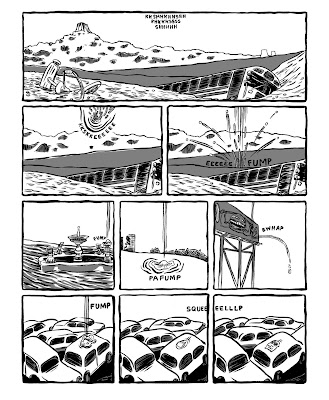 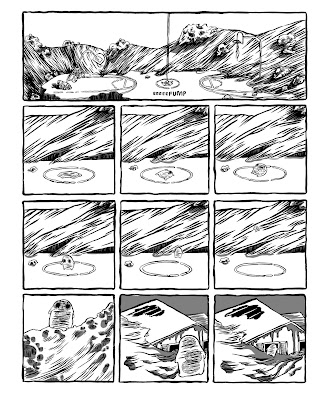 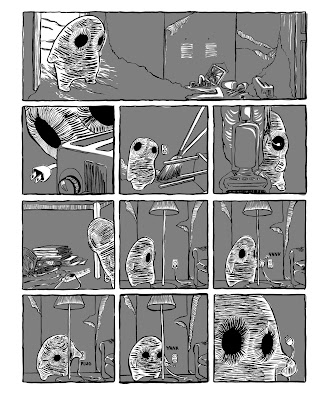 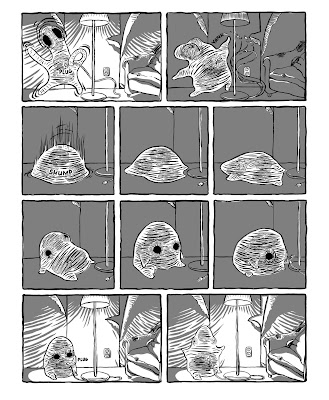 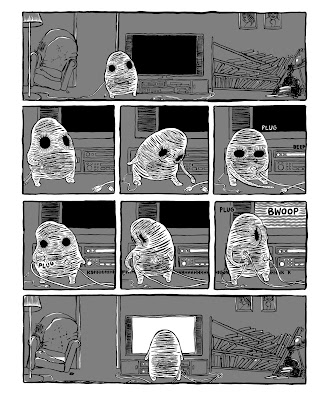 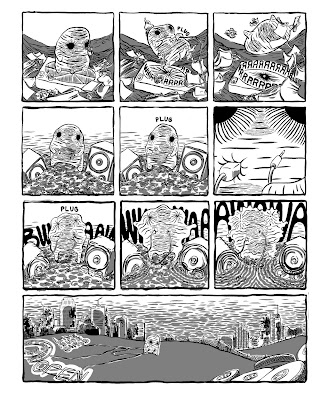 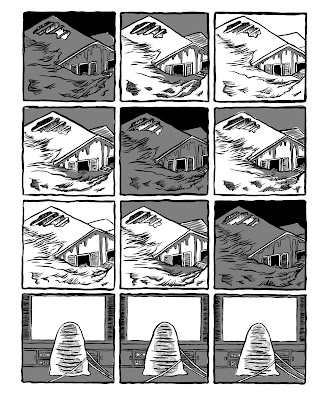 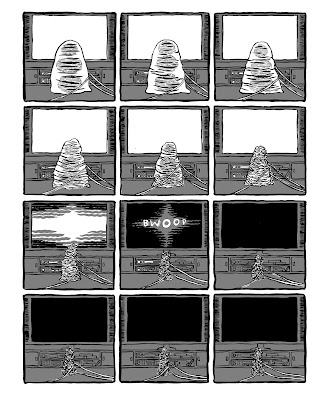 I finished this comic. Remember the SquishSacks? There is a beautiful cover as well, which I will post about later, with versions made on the Xerox machine as well as in Offset. I may tamper with this comic a bit more in the future - mostly I need to put some images on the television - but for now I'm exhausted.
Posted by Lyra at 11:06 2 comments