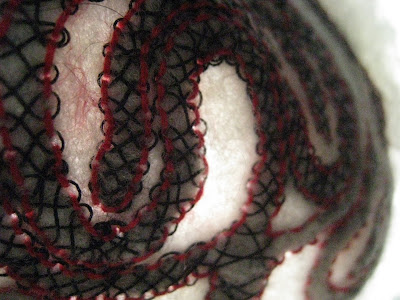 Back in spring semester of my freshman year, I was in a class called "Intro to Fibers". We learned all kinds of things, including felting. 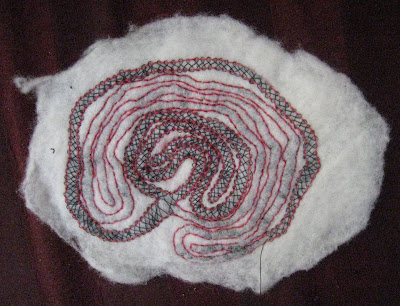 This was a product of an experiment in felting yarn in between thin layers of white wool. I laid out black yarn in the shape of a labyrinth, felted over it, and later embroidered on top. The inner yarn is more visible when held to the light. 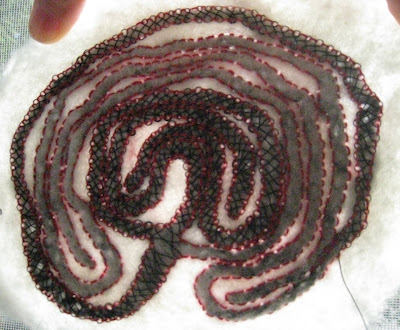 I surrounded the black yarn with backstitching, and julienne stitched across the top. I'd like to eventually finish this, perhaps as a light fixture (in some non-fire-hazard set up) or as a window hanging. 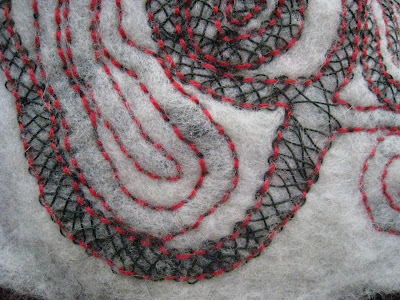 Oh My God There's A Clown Over There 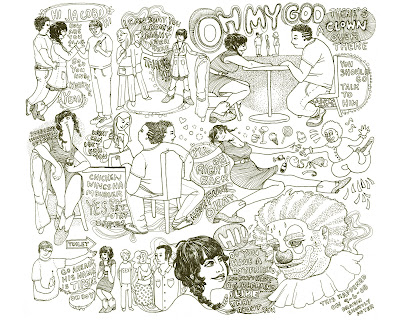 I really wanted to talk to him because I wanted to tell him that I went to Circus School; for some reason I was strongly inclined to reassure him that I, unlike many people I know, am not afraid of and actually really like clowns. I felt like I was making some progress in a campaign to end clown-hate. It was probably the whiskey.

I submitted this to Xerox Candy Bar, a comics zine that SAIC puts out quarterly.
Posted by Lyra at 09:56 4 comments 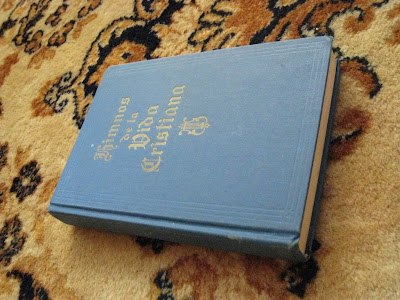 I've been thinking lately, after seeing my best friend make a hollow book, that I would like to do it too. I've always been fascinated by secrets, and books, and especially secret books or bookshelves, and after we looked up how to do it it seemed too easy not to. 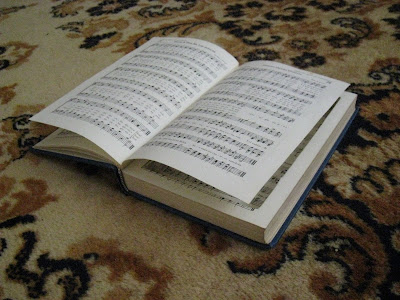 My next question is, what can I do with this? It's nice to have some hollow books around, but to satiate my undying appetite for monotonous repetition, I'd like to somehow make this process profitable so I therefore feel obliged to manufacture over and over again. I was thinking I could sell these at Pantheacon or my school's Holiday Art Sale. The Pantheacon question prompted me to wonder if I should make them more witchy, specifically: Wouldn't it be cool to keep Tarot cards in a hollow book? I could cut the holes in the correct dimensions and line them with some nice fabric. Or, wouldn't it be cool to have little hidden diorama/alters (in the vein of Deborah's wall alters) in your bookshelf? 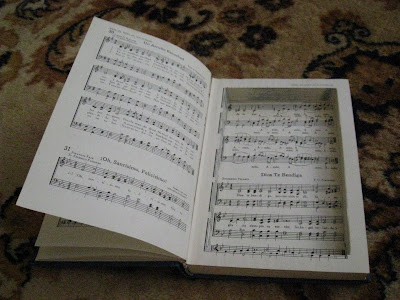 Any thoughts as to if these ideas are good, interesting, salable? I really enjoy making these and want to know if it's a sensible idea.
Posted by Lyra at 06:41 2 comments

Email ThisBlogThis!Share to TwitterShare to FacebookShare to Pinterest
Labels: books, how to, Pantheacon, papercraft 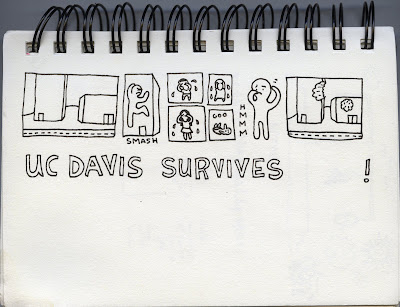 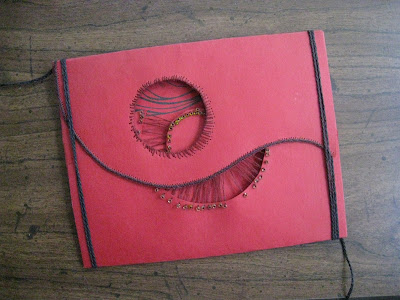 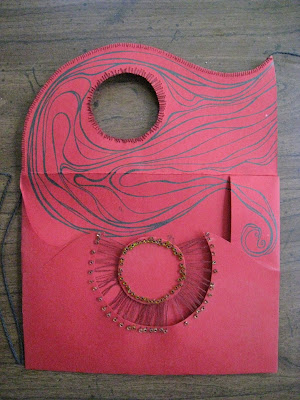 I made this envelope in 2005. I had a crush on some boy and wanted to send him a letter, but in the process of creating the envelope I fell more it love with it and less in love with him. (A familiar story.) I was obsessed with envelopes in general, mainly creating them out of found paper and materials, and this was one of my very first sewing with paper experiments. There are so many things going on here, like suspension: 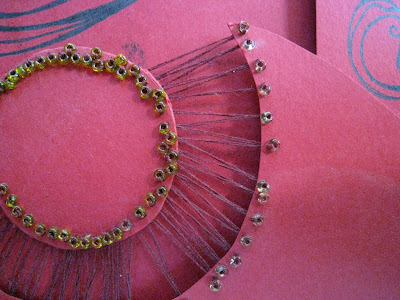 And, as a solution to not wanting the suspending thread to travel across the surface of the paper and instead remain on the unseen side, beading: 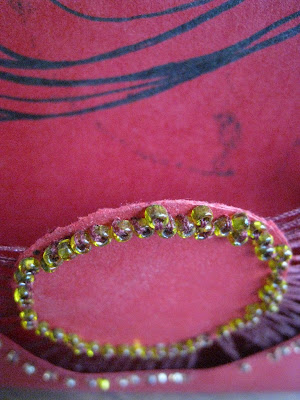 I wanted a hint of this structure to be visible with the envelope closed, so I mirrored the suspended disk in the circle cut out on the flap, and finished the edges with a blanket stitch: 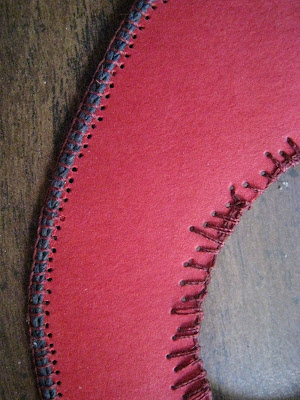 You can see here as well the functional edging of the flap itself. I took black carpet thread and braided a strand somewhere between two and three feet, stitched the middle segment to the envelope with an even blanket stitch, and left substantial length on either end that may be wrapped and tied around the envelope in a number of different fastening methods. 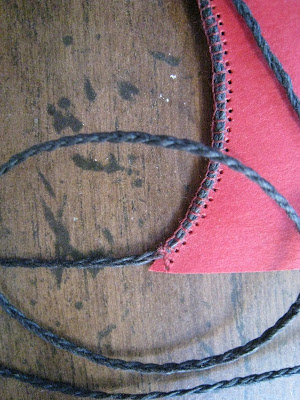 As a final step, and probably because I don't know when to stop when I ought to, I carried the delicacy and curves of the aesthetic into the inner, penned design: 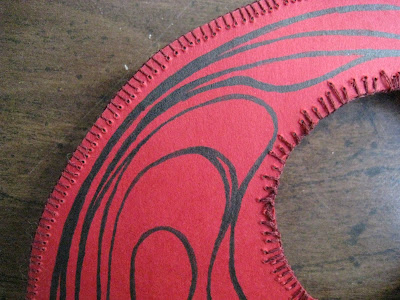 And then decided that this was one envelope there was no letter for, and didn't send it.
Posted by Lyra at 17:52 7 comments 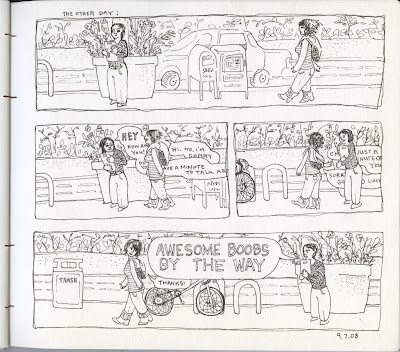 Click for a bigger picture! This is pretty much verbatim from the week before last, except I was actually wearing shorts and by the time I had drawn the seam lines all the way down my leg it was too late to correct. Artistically compromised as a result? You decide.
Posted by Lyra at 09:07 2 comments 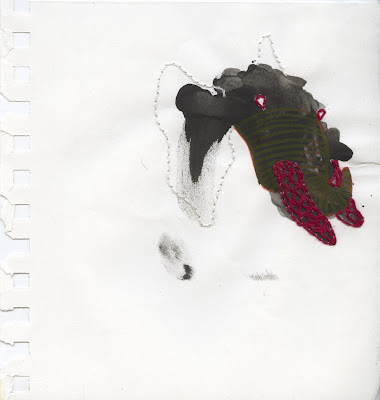 Combining paper and fibers has always been a fascinating practice for me. Here is a piece of paper on which I wiped my fingers after inking this and subsequently enunciated (you know, in the visual sense of the word. Also known as the incorrect sense of the word). Like people seeing Jesus in oilstains, except productive.
Posted by Lyra at 22:19 1 comments 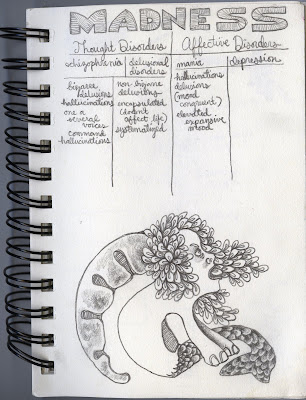 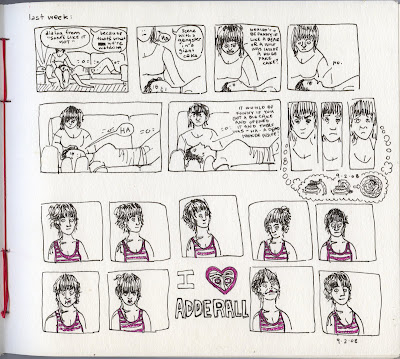 These come from a sketchbook I keep exclusively for comic doodles and diaries. You're gonna have to click on this one if you want to read the top part. Kids, don't do prescription drugs.
Posted by Lyra at 17:34 0 comments

In my Video 1 class last semester we had a series of exercise assignments. One of these was an exquisite corpse process where different groups went off to shoot footage, gave the tape to another group who shot sound, and the director from the third group got to shoot extra footage if needed and then edit it together.

Jordan and Matt are seen playing the guitar (the original footage), and Mark, my groupmate, is the one dancing. 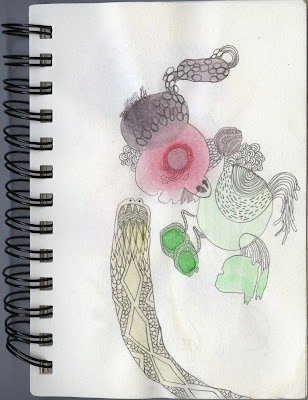 I got these cool pencils a while back. They're called "INKTENSE," a title I feel has to be written capitally in order to really capitalize on the intensity inherent in that caption.

Anyway, they're like regular colored pencils except that when you take a wet brush to them they turn into ink. Above you see my first experiment with that medium. I believe my class was discussing various studies intended to prove a genetic disposition towards bipolarity.
Posted by Lyra at 21:26 1 comments 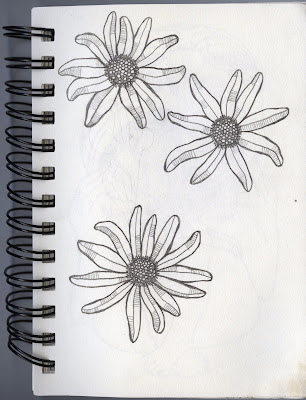 This summer I took a class called Madness, about mental disorders and how the West has conceptualized schizophrenia and mood disorders from the present day back to Freud. I doodled a lot in that class. I drew these daisies, one day, and then wondered at their edges and what I might be able to fit into those. 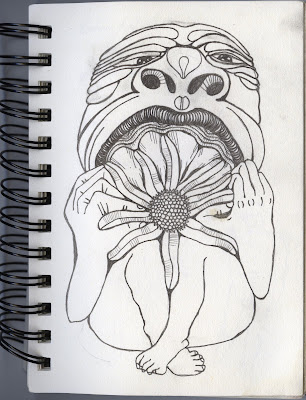