Color tests are how you figure out what filters you need on an optical printer in order for your finished print to be the appropriate shade. These are a couple tests for two of the four films I'm currently finishing (you may recognize The Mystic and House Fuck.)

OK SO IN OTHER NEWS, I uh, I'm graduating after this week, which means three things:
1. The URL for this Blogspot will no longer be correct (currently it's I am an art student what am I doing, but I won't be an art student anymore! Should I change it to I was an art student? Or leave it, in anticipation of educational purgatory such as graduate and doctoral studies? Does it matter? The answer is no, ergo the URL (while factually inaccurate) will remain the same, no need to update your bookmarks.)
2. OMG I'm going to be done with school what the hell
3. I can't remember the third thing because I'm completely exhausted, up to my old shenanigans (see bottom of linked post) again.

ALSO GUESS WHAT
4. I won the top prize SAIC Excellence in Student Leadership award, which is pretty cool. They're going to feature me on the SAIC website, and interview me for SAIC Student Association's new website as well.
5. I am also the recipient of one of the SAIC BFA Fellowship Awards, which means I submitted a portfolio and artist's statement and resume and a bunch of important people who run prestigious schools and museums were like, "yeah, this girl is alright," and then they gave me a bunch of money. So I can actually fund the films I was planning to make this summer, now. Thanks SAIC!

I'M STILL SHOWIN' STUFF
6. On Monday night, May 23rd, ExTV will be airing the second of two (identical) episodes of work by yours truly. It's playing on CANTV, Chicago's public access station (channel 21!) at 11pm. They wrote some nice things about me on the poster; I'm honored.
7. This is not really an official event, but Ross and I will be showing several finished 16mm prints for our family and friends at 8pm on Friday, May 20th, in room 1307 of 112 S Michigan Ave. Anyone is welcome to come, just tell security that you're there for a screening and they'll let you up. Both Ross and my families will be there (it's the night before graduation) and it will also be the unofficial premier of a buttload of stuff I've been working on for years.

AND FINALLY
8. Here are some pictures of me installing Llama Man and Night City in a glass case at the Flaxman library. The show was called Object Relations, and featured three artists (including myself) who work both in film/video and the physical realm. He lives! 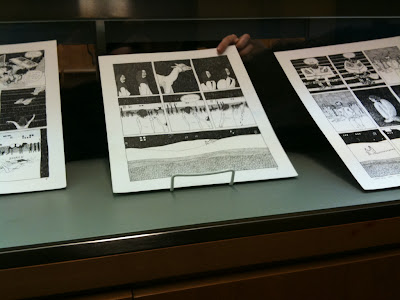 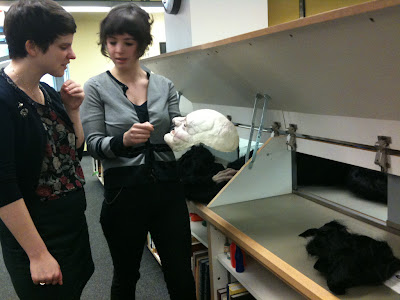 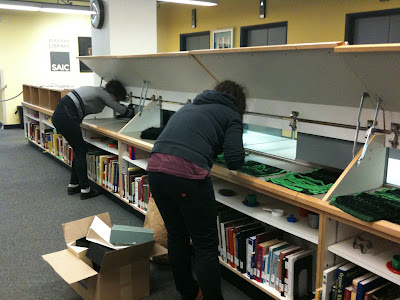 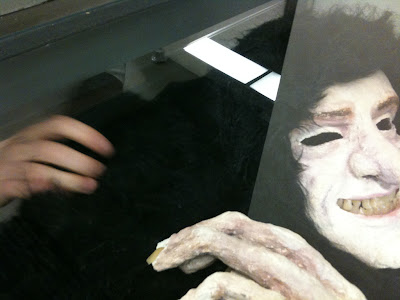 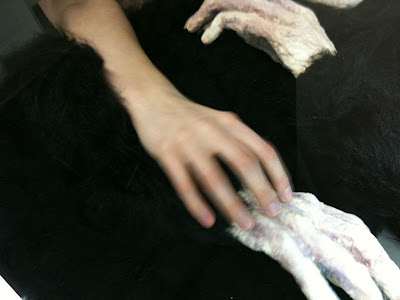