In 2008, I took my first film class with Thomas Comerford, and at the end of the semester I photographed this, my first seriously considered 16mm film. You can see (and read about) the raw footage in my original blog post.

In the following years, I worked on this film in almost every film class at SAIC. I used this movie to learn A/B rolling, working with ProTools, making an optical soundtrack, and contact printing a married final print.

My friend Andy Roche invited me to be a visiting artist in his current class at DePaul. I showed four films and talked at length about my relationship to those works and my thoughts on film in general. Andy said some very nice things about me and his students were attentive and polite; I had a great time.

In other news, my friend Nicki Yowell is putting together a multiplatform, multimedia art book project thing that is cool and that you should know about. It's called Lightness & Darkness, there's a benefit party this Saturday, and their Kickstarter needs help as well. Art friends! Art friends! 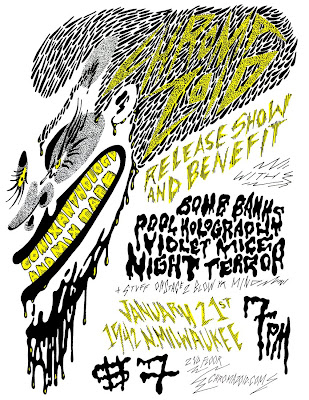 Way back when, in the last months of 2009, I completed my greatest in-camera technical feat to date: The Mystic, a 100ft roll of color negative film that passed through my Bolex six times, bi-packed with sequins, shot through a matte box, painstakingly frame counted: basically the culmination of every intricate and tiresome film technique I had learned during the previous months, and a narrative (sort of) to boot. My original blog entry details these processes. But as proud as I was of the project's (almost complete) success, I knew that it needed something more.

In the ensuing years, I realized that what really bothered me about the original Mystic was its length. Each 'shot,' while carefully timed to an exacting plan, would flit by without the chance to sink in. I needed the film to take the time to overwhelm and hypnotize the viewer, the same way that the mystic hypnotizes himself. I decided to extend each sequence almost threefold, sometimes more, and I began to think about a soundtrack that would mimic the irregular strobe of the sequin, and assist in mesmerizing its audience.

The difficulty lay in extending the film without making it obvious that I was repeating frames over and over each other. I watched my workprint on a Steenbeck, making careful notes about which frame began and ended each shot, when the film was fogged or intense scratches ran through (jumping back and forth from fogged frames to black ones would be obviously unnatural, so I had to repeat within and around each faded section) and then diagrammed a complex, randomized route from which to create a new internegative, using the Oxberry optical printer at school.

Before I could make my internegative, however, I had to do a couple of other things. I wanted to add credits to the movie, make my own name more readable (the end of the film attributes one frame to each letter of my name) and fix the scenes in which Aj only appears on one side of the mystic's crystal ball. To do this, I photographed cut out letters onto HiCon using the animation stand, and colored two single frames with sharpie to use as bipacked mattes on the Oxberry (in order to rephotograph only one Aj into the scenes from which he was lacking). I took my titles, my mattes, and my workprint, and spent two whole days in the hot, hot, dark room that housed my beloved optical printer. The first time, I messed it up, so I had to do this process twice.

After I completed my successful internegative, I transferred it to make the video to which I synched my soundtrack. I collected laugh tracks, audience sounds, and applause from the BBC sound effects library and all over the internet, and cut them up in Pro Tools, rearranging and repeating them in much the same way that I repeated the frames of The Mystic. I gathered a different set of laughs for each shot, so that it sounds different when you're in his head than when you're watching the two of them. The tone over the flashing sequences was Ross's idea, and one I am incredibly grateful for. The clapping rhythm over the "I SEE" section was a happy accident, but it's one of my favorite parts of the film. I really like how it drives the film into epileptic overstimulation. I kind of think this is a movie about television.

The clip above is only a piece of the finished film, which is just under eight minutes. I'm only giving you an excerpt because I want to submit this movie to festivals and sometimes they're weird about it being online too. I also think, as most analog filmmakers do, that to really watch this piece you've got to see it on celluloid in some approximation of a theater setting. That being said, if you really, really want to see the whole thing and you can swear to me on your life that you understand the compromised viewing environment that is Vimeo, shoot me an email and maybe I'll give you the secret link.
Posted by Lyra at 17:09 0 comments

Mr. Square at the Pit of Despair 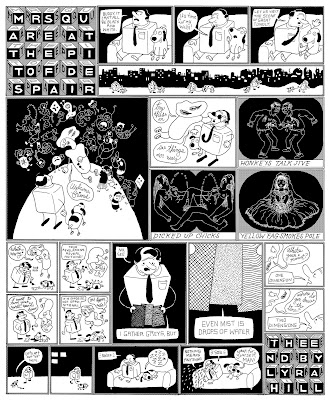 When I heard that some of the crew that formerly produced The Skeleton News were starting up a new publication called The Land Line, I was totally pumped. When Grant asked me to make a comic for it, I was even more pumped. I saw this as an opportunity to try out some new things, namely: a more classic cartoony style, and a more complex, stylized one-page layout. Having previously completed Go Down, and riding high on the fumes of conceptual color comics, the fact that this comic would be printed in black and white on newsprint demanded that I find more in that limitation than mere limitation.

I read this comic at a benefit for The Landline. I used the opportunity to work through an analysis of the layers contained within Mr. Square which, at first glance, is pretty inscrutable. Here's a video of me doing the same thing, but alone and in poor resolution. (Analysis starts at 4:30, if you don't want to hear me doing silly voices.)

Speaking of The Landline, they've got a Kickstarter up to cover the cost of printing issue 1 (which looks, as you can see, awesome) and to keep the whole production going. It's free, it's free of ads, it's beautiful and remarkable and full of high-quality, funny, sexy, interesting, gross things. They've almost reached their goal, but they need more help! Please consider donating, and if you're in Chicago, pick one up if you see one, because these babies are golden. 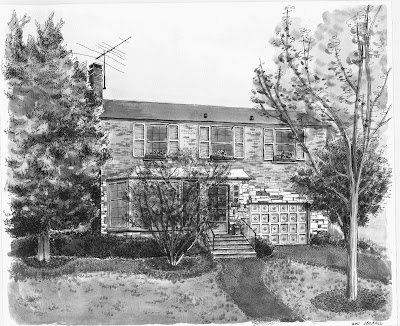 My friend Carolyn (and her siblings) commissioned me to draw this picture of their childhood home. It was a New Year's Eve gift for their mother, who is moving out of this house next month.
Posted by Lyra at 14:40 0 comments