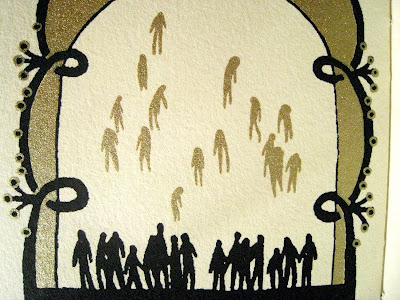 Last summer, in my Comics/Narrative/Material class, we were assigned to create an edition of something, using source material as an influence. I was also in the class 'Madness' at the time, and very interested by R.D. Laing. So I started looking through his work for a passage that struck me, and found this one in 'The Politics of Experience' from 1967, on pages 54-54:

Behavior can conceal or disclose experience. I devoted a book, The Divided Self, to describing some versions of the split between experience and behavior. And both experience and behavior are themselves fragmented in myriad different ways. This is so even when enormous efforts are made to apply a veneer of consistency over the cracks.
I suggest the reason for this confusion lies in the meaning of Heidegger's phrase, the Dreadful has already happened.
Psychotherapists are specialists in human relations. But the Dreadful has already happened. It has happened to us all. The therapists, too, are in a world in which the inner is already split from the outer. The inner does not become outer, and the outer become inner, just by the rediscovery of the "inner" world. That is only the beginning. As a whole, we are a generation of men so estranged from the inner world that many are arguing that it does not exist; and that even if it does exist, it does not matter. Even if it has some significance, it is not the hard stuff of science, and if it is not, then let's make it hard. Let it be measured and counted. Quantify the heart's agony and ecstasy in a world in which, when the inner world is first discovered, we are liable to find ourselves bereft and derelict. For without the inner the outer loses its meaning, and without the outer the inner loses its substance.
We must know about relations and communications. But these disturbed and disturbing patterns of communication reflect the disarray of personal worlds of experience whose repression, denial, splitting, introjection, projection, etc. -- whose general desecration and profanation -- our civilization is based upon.
When our personal worlds are rediscovered and allowed to reconstitute themselves, we first discover a shambles. Bodies half-dead; genitals dissociated from heart; heart severed from head; head dissociated from genitals. Without inner unity, with just enough sense of continuity to clutch at identity -- the current idolatry. Torn -- body, mind and spirit -- by inner contradictions, pulled in different directions. Man cut off from his own mind, cut off equally from his own body -- a half-crazed creature in a mad world.

I started thinking about how to translate this into a form from which editions could be made, and what kind of style I would do it in. Because much of Laing's work focused on schizophrenia with what I felt to be a somewhat spiritual approach, I considered the encasement of this quote in a kind of religious document. I've always been fascinated with the ceremony and absolute devotion to beauty found in many religious trappings and tradition. Specifically, the ridiculous ornateness of the oldest monotheistic religions. So I checked out a bunch of books on illuminated manuscripts and began studying the calligraphy and organization of different pages.

I decided to edit the passage from Laing's book and create an edition of miniature hardbound illuminated manuscripts. I created my own kind of calligraphy based off of the Latin I found in the old books, adapting it to my needs, and borrowing from a wide variety of texts the layout and decorative ideas for much of my own work. 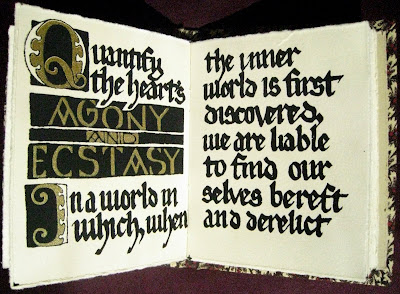 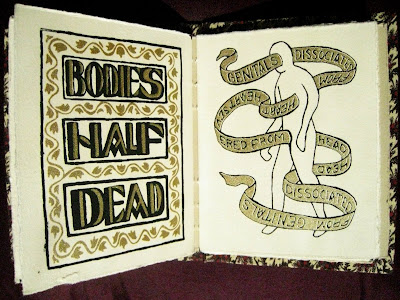 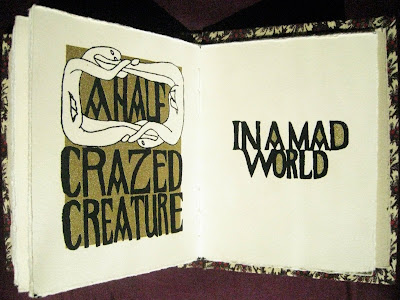 Illuminated manuscripts are decorated with myriad religious figures, angels, kings and the like. I considered for a long time the kinds of characters I wanted to inhabit my manuscript, eventually deciding, since the story was something of a blanket grieviance about all mankind, to draw my people featureless and indistinguishable from one another. Most important was the title page, and developing an initial, excessively decorative letter for the first word, like those found in old storybooks and (duh) illuminated manuscripts. 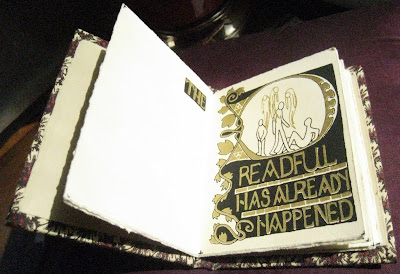 A side effect of this decision which I did not anticipate was that now I have to tell a lot of people, "it's the Dreadful, not the Readful". 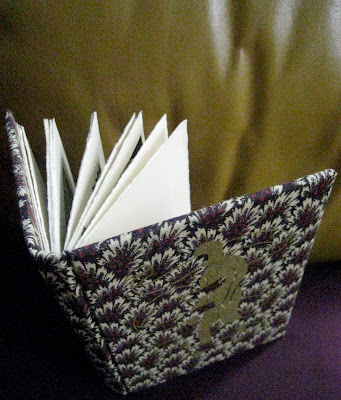 The entire book is a two-color screenprint from hand drawings, on really nice, soft, thick paper in black and gold. I took my favorite image from inside the book and screenprinted it in gold on the cloth I used for the cover. Each book is handbound with archival-quality thread and glue, and carboard weight covers. 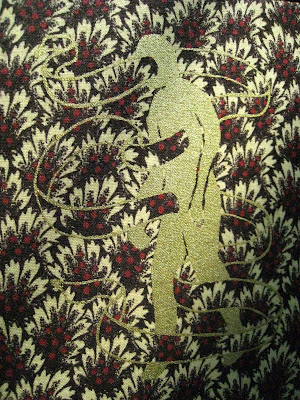 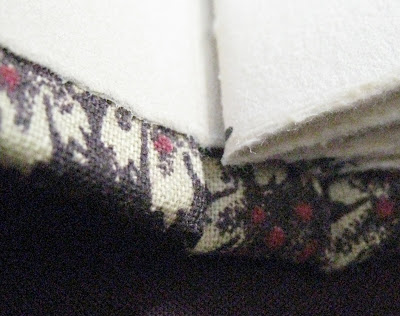 This was an insane amount of work. It was worth it, though. Each book feels as rich as it looks, from the quality of the fabric, ink, and paper, to the slowness with which it is necessary to read it, to understand the calligraphy. One of my favorite things I've done in a long time. 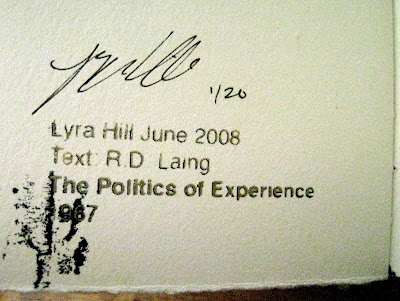