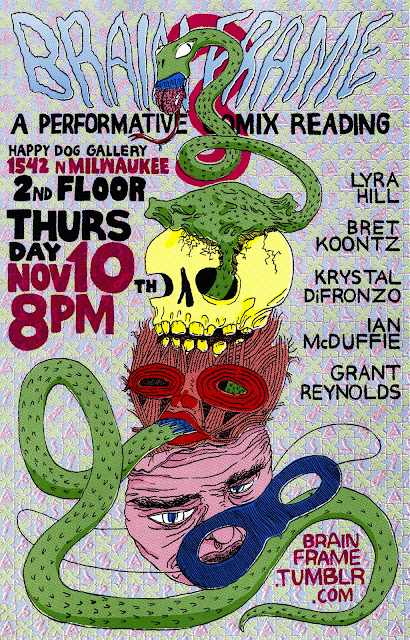 I am very proud to announce the third installment of BRAIN FRAME! It's happening a week from this Thursday (that being the 10th of November) at 8pm, at 1542 N Milwaukee (on the second floor). Myself included, there will be five readers:

It will be sooooo fuuuuuun! I'm serious. Look how excited I am, I'm so excited that I was too lazy to scan in the small version of the flyers, and took a backwards picture of myself holding them instead: 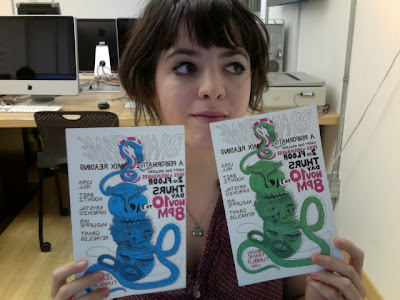 The poster is a collaboration between Ben Bertin and myself. If you can't tell, that's a turkey stuck in the throat of the snake (the snake that's winding through a face skin, a muscle mask, and a skull, and barfing out its brain up at the top there). The snake just ate the whole turkey because it's almost Thanksgiving. You might even say that the snake has Thanksgiving on the brain.

The big version of the poster is actually a seven-color-separation. Each layer (CMY, RGB, K) was printed separately. It's vomitous. When Ben and I finished the drawing, we propped it up on a table in my house and played some metal music, as a test. We nodded our heads and stroked our chins, mumbling "Yes, yes."

If you're on Facebook, there's a page for Brain Frame now. And, um, you should probably 'like' it.

If you attend BF3, you'll see me as a scientist, reading a field report (from the future!) about the squishsacks, complete with alien tissue samples and funny glasses. I'm going first, so get there on time. Here's the documentation, thanks to Jenna Caravello, of my performance at BF2. I'm reading Night City in character as Llama Man. I wrote monologues for him to insert into the narrative of the comic, and later realized that it's the first time I've given him a voice. It was louder than this video makes it seem. You get the idea.