So there's this group of comics artist in Chicago called Trubble Club. They meet every week to make jam comics: one person draws a panel, another draws the next, so on and so on. The participants are all talented, productive individuals with whom anyone would be honored to associate. When I first started making comics in Chicago, Trubble Club was the coolest thing and a symbol of local success. My friends and I joked about starting a rival jam comics group, and placed jealous bets on who would be invited to the Club first.

So, last month my friend Grant Reynolds invited me to join. The freshman infatuation with Trubble Club had worn off, and I'm friends with a lot of the folks who participate, so it wasn't really a big deal (but it was kind of a big deal - or at least it still felt like one). Anyway, I've been attending for the past several weeks. Today Jeremy Tinder posted some new TC comics, and you can see my work in one of them: 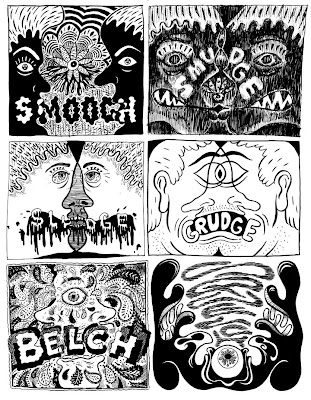 That last panel says "SQUELCH" and I drew it.

Ya'll should check out Trubble Club's website and get excited about the upcoming (recently completed) Trubble Club Full Color Comics Spectacular Issue 5. I have one panel in it, and it's really, really dirty. (Disclaimer: that is not actually the title for the collected TC comics, I just made it up.)
Posted by Lyra at 12:28