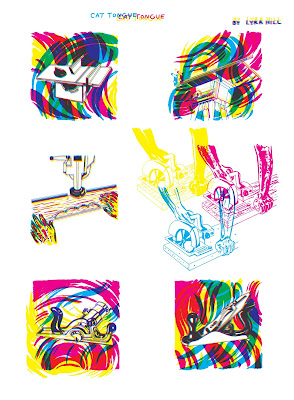 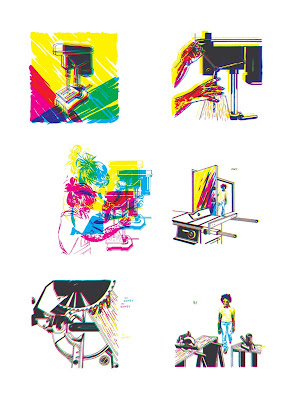 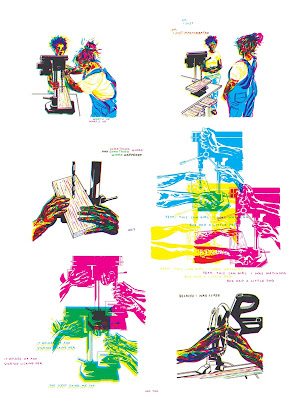 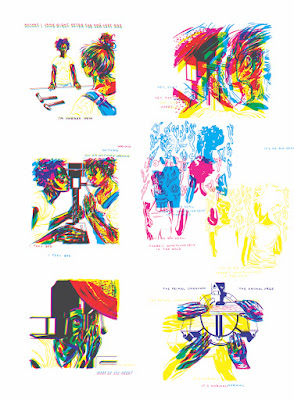 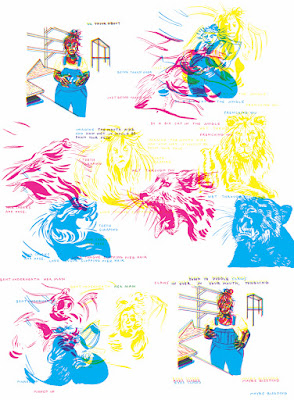 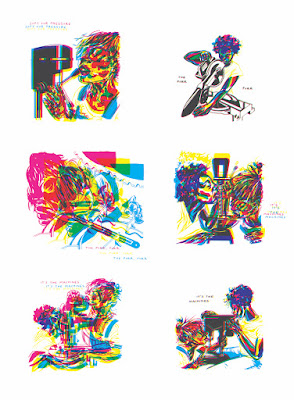 This comic is called Cat Tongue, and was just printed in The Lifted Brow, which is a superb "attack journal" from Australia. This is the first comic that I ever drew for performance first, and print second.

Here's how it looks printed in The Lifted Brow. I am so pleased! You should definitely check out this publication and subscribe if you like experimental fiction and pointed commentary. 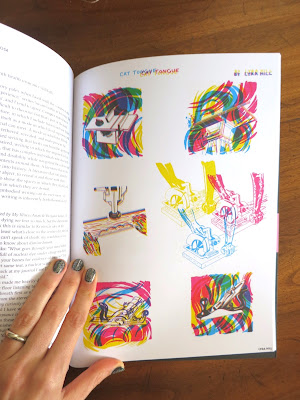 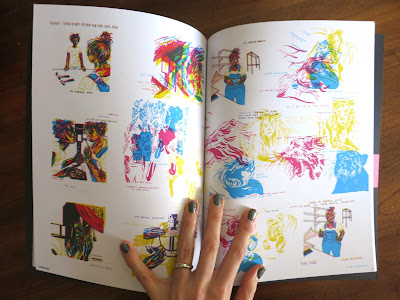 Hey, look, my name is on the cover! 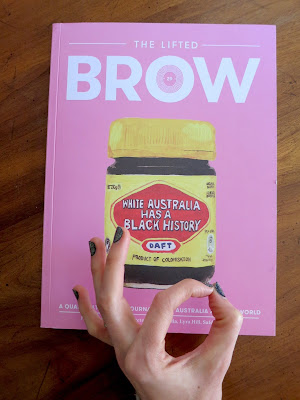 Cat Tongue is a story that came to me over a long period of time, and one that bundles several passions neatly together: lesbianism, power tools, beastial fantasy, hallucinatory psychedelia, and of course, color separation. It is also a conceptual follow-up to Go Down, the first (Cat Tongue being the second) in a projected trilogy of comics about female sexuality and oral fixation.

In this performance, there are three rear-projection screens. The two on either side are illuminated by 16mm film loops. The center screen shows a shifting, CMY color-separated animations of the panels advancing. I am using my trusty vocal effect loop pedal, in combination with an audio feed from one of the 16mm projectors, which is broadcasting the sound of sprocket holes running through an optical sound reader. I am manipulating these two audio inputs (vocal and mechanical) to accompany the hallucinatory narrative. In this performance, analog film machinery = wood shop power tools. When my characters lick the saw and drill, I stand and lick the 16mm projectors.

I began by drawing the machines. Because they are an object of fantasy, they needed to have a different feeling, a different line than the organic materials (flesh, clothing, wood). I staged a photo shoot in an actual wood shop with two friends willing to model. (I captured the 16mm film that would loop in my performance during this shoot, as well.) Drawing on these reference photos and some machine manuals I have, I illustrated all the metal with clean lines, rulers, and high contrast shine and shadow. I penciled in the figures around them. Here's what my base layer page looks like: 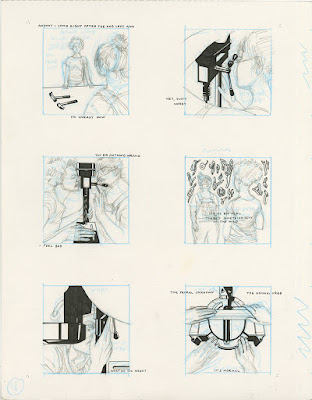 Next, I drew three complete pages on top of each base layer, illustrating the cyan, magenta, and yellow parts of the scene. I used a brush pen and tracing paper. I drew each color layer without referencing the others, only the base page and pencil sketches. 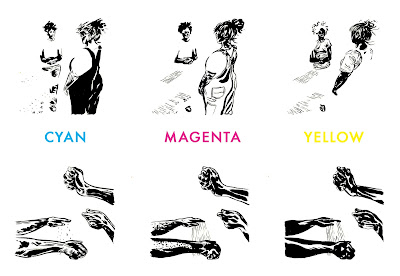 To complete the image, I scanned and aligned each layer in Photoshop (you can see my little triplet registration marks on the base page above). I added the machine drawings to all three color layers, so that in the fleeting instances that the animation aligned, the machines would become crisp and black while the rest of the image would continue to appear in flux.

Preparing this comic for print was a novel challenge. I ended up manipulating the text much more than I do in the video animation, for legibility. It was a delight to attempt to replicate the feeling of the cat-transformation on the printed page, by exploding the panels and totally destroying the previous implication of gutters (and thus, time).

I'll be performing Cat Tongue for a second time on April 21st at the Gene Siskel Film Center, as part of my Conversations at the Edge show. This show is a big deal: I'll be enacting three different pieces, one of which is a brand new performative-comix-reading, as well as debuting three short videos. You should come. Buy tickets here.
Posted by Lyra at 06:00