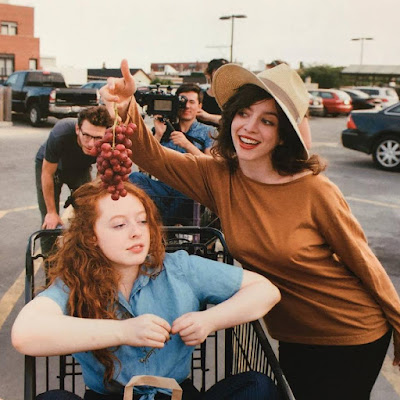 My friends Jerzy Rose and Halle Butler are great. They are nice people who throw good parties, unlike the mean people who throw bad parties around whom their newest feature film revolves. In this film, Neighborhood Food Drive, I portray Madeline Brunhauer. I am the star of this feature film.

Neighborhood Food Drive was directed by Jerzy and written by Jerzy, Halle, and Mike Lopez, another shining gem who starred in Jerzy's last feature, Crimes Against Humanity, in which I also co-starred. 'Star' is a funny verb. I like Mike a lot. He makes incredible animations and soft sculptures. In both Neighborhood Food Drive and Crimes Against Humanity, we play a couple.

Neighborhood Food Drive is making the festival circuit right now and if you can, you should see it. It is a legitimately unique and compelling comedy. Here's a recent review that does a great job describing the film, and includes this flattering passage about my performance:


"Of special note is Lyra Hill as Madeline. She’s an amazing actress, and somehow manages to convey this absurd character without ever giving too much into overwhelming seriousness or seeming caricature. Subtle eye movements, the curl of the lip, a slight shudder, she’s an exciting actor able to express such a rich inner life for a character that is frankly meant to be as shallow as possible."

WATCH THE TRAILER! Get excited!